Big Power for the Prince of Wales

The U.K. Royal Navy’s Queen Elizabeth Class aircraft carriers presently under construction are due to become the centerpiece of the nation’s defense force. Upon entering operation, each ship will essentially serve as floating four-acre military base capable of travelling up to 500 miles per day. 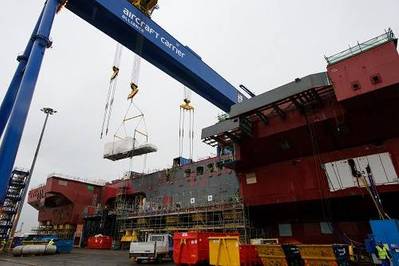 The U.K. Royal Navy’s Queen Elizabeth Class aircraft carriers presently under construction are due to become the centerpiece of the nation’s defense force. Upon entering operation, each ship will essentially serve as floating four-acre military base capable of travelling up to 500 miles per day.

The second of the two QE Class ships, HMS Prince of Wales, now being built at Rosyth, has recently received its second gas turbine package, the first of which was installed in March. Each 120-metric-ton GTA package consists of a GE alternator coupled to a Rolls-Royce MT30 gas turbine contained within an enclosure, aptly called the gas turbine enclosure.

Operating an aircraft carrier obviously requires a lot of power. For installation aboard Prince of Wales, enter the Rolls-Royce MT30, dubbed “the world’s most power-dense marine gas turbine.”

Generating a whopping 36 megawatts each (around 50,000 horsepower apiece!), Prince of Wales’ two mighty MT30s combine to provide roughly two-thirds of the 109 megawatts required to power the 65,000-metric-ton behemoth. That’s enough energy to power a large town, as noted the shipbuilder.

More about the MT30: the gas turbine has been granted type approval from ABS and Lloyds and is DNV design assessed and can be configured for either mechanical or electrical drive and maintains operating efficiency down to 25 megawatts. And despite its immense power offering, Rolls-Royce said the MT30 is designed with 50-60 percent fewer parts than others in its class and meets all current and anticipated emissions legislation – without modification and using commercially available fuels.

Equipping Prince of Wales was no easy task, however. Installation involved lifting the MT30 gas turbine and associated ancillary equipment housed in a steel package (the aforementioned gas turbine enclosure) onto the ship structure. With the enclosure in place, the large alternator, which is driven by the gas turbine to produce electrical power, was then hoisted into place.

Once operational, the GTAs will supply HV power to the four propulsion motors as well as the 13 ship service transformers, which distribute LV power to the weapons systems, mission systems equipment and navigation systems, as well as power to run required hotel services.

Prince of Wales, along with HMS Queen Elizabeth, are being built and delivered by the Aircraft Carrier Alliance, which includes BAE Systems, Thales UK, Babcock and the U.K. Ministry of Defense.
Email
Search Maritime Propulsion Jobs