The “most sustainable city in Canada” has a new electric tour boat plying its scenic waterways. 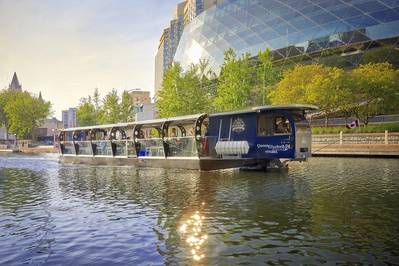 Now plying the Rideau Canal is an all-new, emissions-free electric tour boat powered by two 80-horsepower Torqeedo electric motors.
The high-tech 75-footer, Queen Elizabeth Dr., is reportedly Canada’s largest electric tour boat, officially launched on June 9, 2016 by Catherine McKenna, Minister of Environment and Climate Change, Minister responsible for Parks Canada and Member of Parliament for Ottawa Center.
Queen Elizabeth Dr. has capacity for 100 passengers and is the first of two new vessels built for guided tours and events on the Rideau Canal. The second vessel, Colonel By, is expected to enter service in the spring of 2017.
Running four times daily, the 1.5-hour tour travels from Chateau Laurier to Dow's Lake, passing more than 30 of Ottawa’s landmarks. The Queen Elizabeth Dr. has two Deep Blue systems installed, but only one is used at a time. The canal is quite narrow for the long vessel; instead of turning around, it engages the second motor.
Explaining his decision to opt for the Torqeedo motors, Robert Taillefer, owner of The Queen Elizabeth Dr. and operator of Ottawa Boat Cruises, said, “Torqeedo's high-power Deep Blue system was the obvious choice to propel Canada's largest electric passenger vessel because of its comprehensive safety systems. These systems were fully vetted by the Canadian government in order to have the vessel certified.”
Ottawa is already familiar with the benefits of electric boating; a Torqeedo-powered water taxi has served the downtown area for several years. When Parks Canada opened an opportunity for a new tourism operation within the site, it specified that only electric boats would be considered.
Ottawa's Riverkeeper Meredith Brown said, “Our organization is always happy to see new opportunities for people to connect with the river in a sustainable way, and there is nothing like a quiet electric motor to help everyone enjoy the natural sounds of the river.”
Torqeedo said its Deep Blue line provides the horsepower, torque and performance of a diesel or gasoline-powered engine, without the noise, fumes and pollutants. Torqeedo offers a wide range of outboard and inboard motors powered by high-voltage lithium batteries with fast recharge times.
Email
Search Maritime Propulsion Jobs