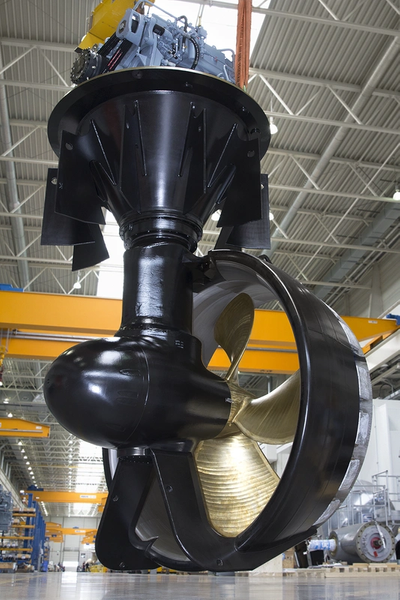 SCHOTTEL, a leading manufacturers of marine propulsion systems, has announced the 1,000th delivered rudderpropeller type SRP 460. This makes it the most successful azimuth thruster worldwide.

With a maximum power rating for tug duties of up to 2,350 kW per engine, rudderpropellers such as the SRP 460 are among SCHOTTEL’s bestsellers. To ensure it always offers customers state-of-the-art design, construction and economical operation, the SRP 460 has undergone several technical updates through the years.

First delivery in 1999
Following its launch in the late 1990’s, the first SRP 460 (formerly SRP 1515) was delivered to the Danish tug operator Svitzer in 1999. The company’s harbor tug “Mussandam” was equipped with two SCHOTTEL Rudderpropellers type SRP 460 – each with an input power of 1,850 kW. The tug is currently being operated by the Spanish shipping company Boluda under the name “VB Muleton”. The two original SRP 460 thrusters have now been in operation for more than 20 years and still provide the vessel with maximum maneuverability and bollard pull.

To keep the rudderpropellers state-of-the-art, several technical updates have been carried out in the years since first delivery. These increased input speeds and propeller diameter. The latest update also led to the development of the SCHOTTEL Rudderpropeller type SRP 490, the enlarged version of the SRP 460. It stands out with a propeller diameter of up to 2.80 m and a tug duty of up to 2,550 kW per engine.

Universal all-rounder
Thanks to continuous further developments by SCHOTTEL, the SRP 460 is also available in numerous other forms. These include the SCHOTTEL Combi Drive (SCD), in which the electric motor is integrated vertically into the rudderpropeller, as well as the SCHOTTEL Twin Propeller (STP) for vessels which require high efficiency at limited draft and large propeller clearance. Beyond this, there is a retractable rudderpropeller (SRP R) variant deliverable, which offers greater flexibility in terms of design and operational profiles, and a Rudder EcoPeller (SRE), which is characterized by top performance in terms of overall efficiency and course-keeping stability.

Beyond this, the SRP 460 is equipped with SCHOTTEL state-of-the-art technologies such as ProAnode and the award-winning HTG technology. As a result, it is able to transmit 15 percent more power than conventional bevel gears. This also makes it possible to design more compact propulsion systems and constitutes the basis for more efficient and more powerful thrusters. Furthermore, latest SDC40 and SDV45 high-performance nozzles enable provable higher efficiency at open-water speed combined with excellent bollard pull values.

SCHOTTEL ProAnode protects the anodes against external impact and reduces the drag resistance of the nozzle by moving the position of the anode from the outside surface into the cross-section of the nozzle tail. This leads to subsequent operational benefits, such as reduced flow interference, and thus fuel savings. SCHOTTEL LEACON is a type-approved leak-free sealing system and meets current VGP requirements without the need to use EALs.

The SRP 460 and the SRP 490 are equipped with HTG technology, high-performance nozzles and SCHOTTEL ProAnode as standard.