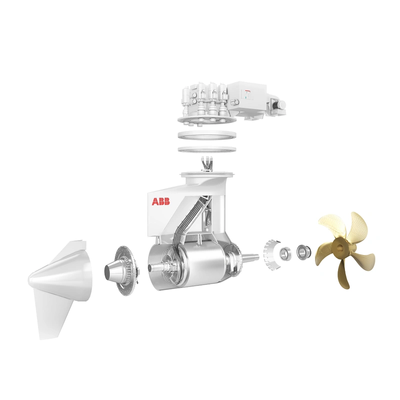 Since its launch in 1990, Azipod electric propulsion has become the industry standard for a wide range of vessel segments ranging from smaller crafts to icebreakers capable of independently operating in the harshest conditions.

In response to customer requests, ABB has filled the gap between the low and high-power range of Azipod propulsors with the launch of a new series available in 7.5-14.5MW. In addition to ferry and RoPax vessels, this power range will also be applicable for larger offshore construction vessels, midsize cruise ships and shuttle tankers.

With this expansion, the Azipod propulsion family now covers the power range of 1-22MW.

Recent breakthrough orders in the ferry segment include the Azipod propulsion system specified for an LNG-powered vessel due for delivery to Viking Line next year. Azipod propulsion was also preferred by Wasaline for the recently ordered dual-fuel and battery power ferry, which will operate between Sweden and Finland.

At the core of the new mid-power range are ABB’s latest fourth generation permanent magnet motors, which draw on proven Azipod propulsion technologies but have been refined to increase power and maximize efficiency. Additionally, the latest ‘M’ series of Azipod propulsion feature technical advantages tailored to provide operating benefits for ferry and RoPax owners and operators.

The mid-power range propulsion units have been designed for low onboard height, which allows placing the Azipod system under the car deck of RoPax vessels, ensuring smooth loading and unloading of vehicles, as well as allowing for maximizing the deck space. The design simplicity of the propulsion system provides increased robustness and reliability, at the same time allowing for ease of maintenance.

Based on the straightforward, robust and easy to maintain design principles that have seen Azipod propulsion selected across 25 vessel types over close to three decades, the latest mid-power series comes to market at a time when ferry and RoPax ship owners face increased pressure to improve energy efficiency and cut emissions.

An independent study by Deltamarin, a ship design, offshore engineering and construction group, where a RoPax vessel equipped with the Azipod system was compared to a conventional vessel with shaftline propulsion, has shown average savings in fuel and energy consumption equivalent to $1.7 million annually. Lower fuel consumption also means that the Azipod-powered ferry would reduce CO2 emissions – by approximately 10,000 tons per year. This is equivalent to the amount of carbon dioxide emitted by about 2,200 passenger cars annually.

The study included advanced simulations of a ferry equipped with twin 10 MW Azipod units travelling on seven existing ferry routes. In addition to the independent study, ABB has also measured how the Azipod propulsion system delivers more resilience to weather and allows for approaching port at higher speeds and with higher precision to enhance schedule-keeping.

ABB’s Azipod propulsion is a gearless steerable propulsion system where the electric drive motor is in a submerged pod outside the ship hull. Azipod units can rotate 360 degrees to increase maneuverability and operating efficiency, with the proven ability to cut fuel consumption by up to 20 percent compared to traditional shaftline propulsion systems. Due to minimal noise and vibration, Azipod propulsion also improves passenger and crew comfort.