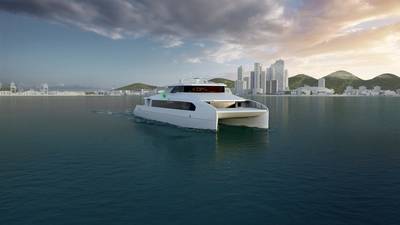 Due for delivery in 2022, the new ferry represents the first commitment by South Korean authorities to a plan which will see 140 state-owned conventionally powered vessels replaced with those operating on cleaner alternatives by 2030, in line with South Korea’s plan to achieve net-zero emissions by 2050.

As the first system integrator chosen to support this initiative, ABB will deliver an end-to-end electric power and propulsion solution for the twin-hulled ferry. The 40-meter catamaran ferry will have the capacity to carry up to 100 passengers and five crewmembers and will operate between Busan’s North and South ports, taking about one hour to complete a return journey with an average operating speed of 13 knots (24 km/h). Financial details of the contract were not disclosed.

Busan-based shipbuilder Haemin and ABB have also signed an agreement to collaborate on further vessel projects in the future.

The ferry will be powered by two 1,068-kWh battery packs, which provide enough power for the vessel to complete up to four return journeys before charging from shore during the vessel’s overnight stops. ABB’s Onboard DC Grid power distribution system will ensure that the battery output is delivered to the vessel’s subsystems in the most optimal way, while ABB's Power and Energy Management System (PEMS) will control the overall power distribution, increase fault tolerance and provide a high degree of reliability, according to ABB.

Once in operation, the ferry will be remotely monitored and supported by ABB’s global network of ABB Ability Collaborative Operations Centers. Remote support and connectivity, together with advanced data analytics enabled by the ABB Ability Remote Diagnostics System, will further enhance the vessel’s operational safety and ensure optimal performance, while helping to promptly detect and correct faults on board.

The global ferry industry, which, according to trade association Interferry, is responsible for transporting over 2 billion passengers annually is under pressure to reduce its carbon footprint. ABB’s electric propulsion technology will mean Busan Port Authority’s new ferry immediately achieves the International Maritime Organization’s global target to cut annual emissions by at least 50 percent by 2050 from 2008 levels.

Electrification is widely considered as one of the key solutions for reducing ferry emissions worldwide. According to data from the Maritime Battery Forum, over 130 battery-powered ferries are in operation, with more than 90 on order. ABB notes it is supporting ferry operators such as P&O Ferries, Washington State Ferries and others for ferry electrification projects.