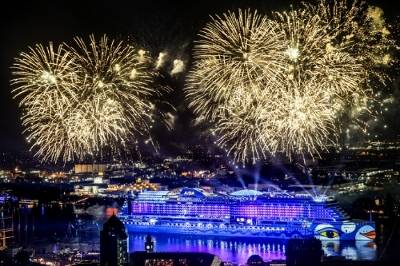 AIDAprima made its debut with a light show and naming ceremony witnessed in person by 1.6 million visitors at the 827th Hamburg Port Anniversary. AIDAprima launched as the corporation’s most environmentally friendly ship, equipped with a dual-fuel engine that can be powered by liquefied natural gas (LNG) while in port and at sea.
“The christening was an emotional moment for me – I’m very proud of our new ship,” said Felix Eichhorn, president of AIDA Cruises. “With AIDAprima and the next three new ships to be built for our line, we are once again charting new territory in the tourism industry, and we will continue to drive growth in the German cruise market.”
Several million people watched the festivities at the harbor, on television, online and on Facebook when the actress Emma Schweiger christened the ship. A music and light show followed by fireworks turned the night sky over the Port of Hamburg’s festival promenade into a glittering sea of color. AIDAprima was accompanied for the occasion by another member of the fleet, AIDAaura, which was also part of the christening ceremony.
“We are thrilled to officially welcome such a beautiful and technologically advanced ship to our fleet, and it was only fitting that AIDAprima’s naming was celebrated with a show and ceremony as impressive as the ship itself,” said Roger Frizzell, chief communications officer for Carnival Corporation. “This weekend marked another important milestone as we welcome four new ships to our fleet in 2016. Whether we are sailing our new or existing ships, our number one goal always remains the same – to do everything we can to make sure our guests have a great experience.”
Carnival Corporation has now taken delivery of three new ships in 2016. In addition to AIDAprima, Carnival Cruise Line took delivery of its 3,954-passenger Carnival Vista on April 28, while Holland America Line celebrated the handover of its 2,650-passenger ms Koningsdam on April 2. The company is scheduled to receive its fourth new ship delivery of 2016 when the Seabourn Encore joins the fleet later this year. Including Seabourn’s new Encore ship, Carnival Corporation has a total of 15 new ships scheduled to be delivered between 2016 and 2020.
AIDAprima completed the full test run for its LNG operation, meaning the ship will be able to operate with the fuel while in port – a first for the cruise industry and another positive outcome for the environment as running on LNG will lead to a reduction in emissions when the ship is docked.
Compared to the use of conventional marine diesel with 0.1 percent sulfur content, emissions and particle discharge will be reduced by using LNG, and the emission of sulfur oxide and soot particles will be prevented. Nitrogen oxide emissions will be reduced by up to 80 percent and carbon dioxide emissions by 20 percent.
“LNG is the world’s cleanest burning fossil fuel, and with AIDAprima, we are the first cruise line in the world to supply a ship with low-emission LNG for operation in port,” Eichhorn said. “We are once again proving that we are pioneers of innovation, and I am convinced that our path is a clear signal to the ports and LNG producers to invest in the necessary infrastructure.”
Additionally, Carnival Corporation's four next-generation cruise ships for Costa Cruises and AIDA Cruises set to be delivered in 2019 and 2020 will use LNG to generate 100 percent of the ship's power both in port and on the open sea.
The 124,100-ton AIDAprima, built and delivered by Mitsubishi Heavy Industries, Ltd. (MHI) in JApan, will be able to accommodate 3,300 passengers and will feature a variety of entertainment, dining and shopping, as well as onboard activities. The ship features 12 restaurants, 18 bars and 14 stateroom categories.
AIDAprima is homeported in Hamburg, making AIDA Cruises the first cruise line to have a ship based in Germany year-round. AIDAprima began on April 30 the first of its all-season seven-day journeys through Western Europe including London, Paris, Brussels and Amsterdam.
• Mitsubishi Heavy Industries Ltd. • liquefied natural gas • Carnival Corporation
Email