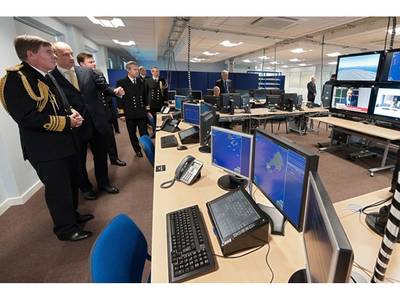 A training facility has been opened to prepare Royal Navy sailors to man the first of the Queen Elizabeth-Class carriers, due in 2016.

The first of the  65,000-tonne carriers is currently being assembled at Babcock's dockyard in Rosyth, and will be able to take up to 40 aircraft; almost twice the capacity of the Invincible Class carriers.

To keep up with the state-of-the-art technology on board sailors and engineers will be trained in a £1m building at HMS Collingwood in Fareham, Hampshire, which has been set out in the same way as an operations room on board the new carrier.

The personnel will be trained on the new mission system which links all the combat, communications and visual surveillance systems together by a fibre-optic network - these are usually separate on warships, allowing for a much more integrated way of working.

As the 'brain' of the ship, the mission system brings together air traffic control, navigation, tactical pictures compilation, communications and mission planning for the embarked F-35 Joint Strike Fighters and Merlin helicopters. It will also allow for engineering and logistic support.

Named after Admiral Sir Lumley Lyster, the mastermind behind the Taranto Raid and architect of the Royal Navy's carrier strategy during the Second World War, Lyster Building at HMS Collingwood marks the collaboration between the Aircraft Carrier Alliance, Navy Command and Flag Officer Sea Training.

The equipment used in Lyster Building will be moved to the HMS Queen Elizabeth once personnel have been trained in a bid to keep costs low. The first Royal Navy weapon engineers are set to join the carrier in 2013 in Rosyth.