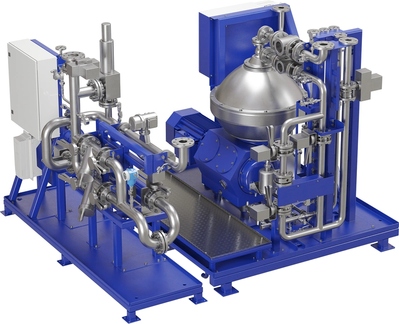 Alfa Laval PureSOx gives customers the option of scrubbing in closed loop, either by choosing a fully equipped hybrid system or by installing a hybrid-ready system that can be upgraded for closed-loop operation later. With the launch of a modular new PureSOx water cleaning system (WCS), these possibilities become even more attractive.

Though few in number and limited in scope, local bans on open-loop scrubbing have intensified the interest in hybrid scrubber solutions with closed-loop functionality. While marine customers are focused on complying with today’s needs at minimal cost, there is peace of mind in the ability to upgrade if regulations should become more stringent. Both considerations are integral to the new PureSOx water cleaning system (WCS).

Modular options increase water-cleaning capacity
As before, the foundation of the PureSOx WCS is high-speed centrifugal separation. This is a core technology in which Alfa Laval has well over a century of experience, as well as the most effective method of cleaning water at sea. In the new modular system, the separator module can be combined with a flocculator or a membrane module for additional capacity, either directly or through a later upgrade.

New features lower closed-loop operating costs and increase safety
Still more benefits are achieved through two features that are new to the PureSOx WCS. One is the ability to use either NaOH or non-hazardous Mg(OH)2 as the alkaline additive, based on which is desired or most affordable at the time. The other is the option of using seawater rather than fresh water for replenishing the water system, which yields lower energy costs.

A flexible hybrid offering – proven in 10 years at sea
With the new capabilities of the PureSOx WCS, Alfa Laval adds strength to an already convincing hybrid system offering. Hybrid PureSOx systems have excelled in a decade at sea, ever since the very first PureSOx system – also a hybrid – set sail on DFDS Ficaria Seaways in 2009.

For customers who hesitate to commit to a hybrid today, but who still wish to future-proof their scrubber investment, Alfa Laval provides PureSOx systems as hybrid-ready. This option, which is Alfa Laval’s standard for open-loop deliveries, includes the connections, hardware accommodations and software flexibility needed for a later hybrid upgrade. The upgrade can be done at a shipyard quay, or in some cases while the vessel is sailing.