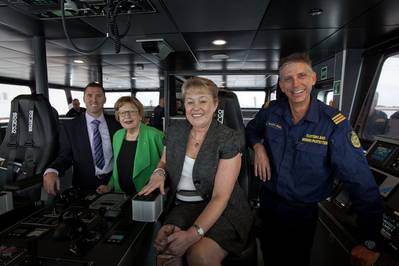 The 'Cape St George' has been named during a ceremony held at Austal’s Henderson shipyard in Western Australia.

Cape St George is the first of eight new boats being built by Austal for the Australian Customs and Border Protection Service under a design, construct and in-service support contract valued at approximately A$330 million.

The naming ceremony was attended by the Australian Special Minister for State, the Hon. Gary Gray AO; and former President of the Australian Senate Margaret Reid AO, who officially named the vessel.

Austal’s role extends beyond the design and construction of the vessels. The company is also using its in-house expertise to develop and integrate sophisticated electronic systems for command, control and communication.


As part of the A$330 million contract, Austal will also perform ongoing in-service support for the Cape Class fleet over at least eight years, encompassing a full range of intermediate and depot level maintenance activities, valued at a minimum of A$50 million.

Construction of the second Cape vessel is well underway, with the keel laid in January, while work has commenced on the third Cape vessel.