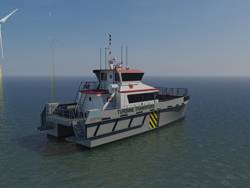 Building on its initial success in the renewable energy market, Austal has confirmed a contract for a fourth wind farm support vessel for Turbine Transfers Limited. The order is the first for a new Austal design which will enable safer and more efficient offshore wind turbine service.

Welcoming the follow-up order from the UK-based company, Austal Chief Executive Officer, Andrew Bellamy, said the shipbuilder had continued to refine and enhance its Wind Express vessel range following its launch in mid-2010 as part of a strategy to pursue new commercial vessel markets.

“There is clearly an increasing desire in the industry for vessels with enhanced capability, particularly in terms of performance in rough conditions,” Mr Bellamy said.

“This is a challenge that we have already successfully addressed in the ferry and naval markets with our unique trimaran technology. We have now applied that expertise to develop and prove a new hullform that provides a step change in capability for the offshore industry.”

The new design combines the seakeeping and fuel efficiency benefits of Austal’s trimaran hull configuration with a small waterplane area at rest, to deliver low vessel motions both in transit and when alongside turbines. This enables wind farm personnel to be successfully transferred in considerably higher sea states than is practical with catamarans of similar size.

Managing Director of Turbine Transfers, Captain Mark Meade, said his company was using Austal technology to support the next phase of wind farm development which would see a much larger number of turbines installed farther offshore and in other areas with rougher sea conditions.

“To do that we need to be able to transfer further, and in larger waves, while still providing the technicians we carry with comfortable transits and safe turbine step-offs,” he said.

“The extensive analysis and tank testing that Austal has done makes me very confident that this new boat will enable us to do that, and provide us with a competitive advantage.”

Andrew Bellamy said the new design would improve the viability of offshore wind farms by overcoming the seakeeping limitations of the support vessels currently used in the industry.

“To date most wind farms have been relatively close to the coast, and serviceable with fairly basic boats. Now as they move further offshore there is a need for a second generation of vessels that can address the significant challenges this brings.

“Being able to transport wind turbine technicians comfortably in the rougher sea conditions over longer distances is the key requirement, and we have produced the solution to that need,” he said.

As well as minimising seasickness amongst personnel and providing safer transfer conditions, the new design’s enhanced seakeeping performance can improve the economics of offshore wind farms.

“Being able to operate in a broader spectrum of sea conditions increases overall operability which means there is the potential to reduce the number of vessels and personnel required to support a given site; reducing capital and operating costs without sacrificing power generation reliability,” Mr Bellamy explained.

Turbine Transfers is a wholly owned subsidiary of Holyhead Towing Company, which has been operating work boats since the early 1960s. Turbine Transfers currently operates a fleet of over 20 fast catamarans that transport personnel and equipment to and from offshore wind turbines. Its long term customers include Siemens, RWE NPower, Van Oord, Dong Energy, EnBW and Royal Boskalis Westminster.

The order is part of the company’s ongoing fleet expansion plans which already includes three 21 metre catamarans ordered from Austal in July 2011. Construction of those vessels is progressing well, with delivery scheduled for May this year. The new Turbine Transfers vessel is designed to operate in ocean areas of all European countries, including in the demanding conditions of the North, Irish and Baltic Seas. It is designed to operate in up to 3.0 metres significant wave height.

The 27.4 metre long, 10.5 metre wide vessel will be operated by three crew and be able to transfer 12 wind farm technicians, their effects and over four tonnes of deck cargo, stores and miscellaneous equipment. Two 900kW MTU diesels coupled to waterjets will provide a service speed of 23 knots, with the directional thrust of the waterjets being supplemented by a bow thruster for low speed manoeuvring and station keeping. With an operating range in excess of 360 nautical miles, the vessel will be able to operate up to 75 nautical miles offshore, well beyond the distances of current wind farms.

The vessel will initially be chartered to Turbine Transfers for a period of up to five years. It is scheduled for completion in November.