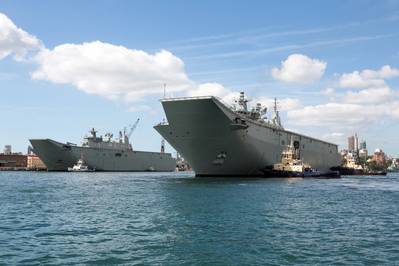 GE Marine reports that its LM2500 gas turbines now power the Royal Australian Navy’s HMAS Adelaide which was commissioned in late 2015. Alongside sister HMAS Canberra, these 230-meter-long Landing Helicopter Dock (LHD) ships are the largest vessels ever built for the RAN.
According to the RAN, HMAS Adelaide was designed with the shallowest possible draft and can deploy an embarked force of more than 1,000 personnel and their equipment, landing ashore via landing craft or helicopters.
GE Marine notes it has been a longstanding supplier to the RAN, with a total of 30 LM2500 marine gas turbines on order or delivered. In addition to the LHDs, the RAN uses LM2500s for the Adelaide- and ANZAC-class frigate programs. Through a multiyear agreement, GE provides the Australian Defense Materiel Organization’s Maritime Cross-Platform Systems Program Office with depot level maintenance for these turbines, performed by Air New Zealand Gas Turbines. GE also will provide program management, on-site field service support, and warehousing and inventory management including spare parts and inventory replenishment throughout the life of the contract. The LM2500 also will power three new RAN Hobart-class Air Warfare Destroyers that are based on the design developed and used by Navantia of Spain for the Spanish Navy’s F100 frigate program.
• gas turbines • inventory management • Landing Helicopter Dock
Email