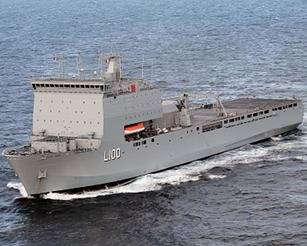 HMAS Choules departed Sydney on 13 June 2012 for Queensland where it was scheduled to support Exercise Hamel in the Shoalwater Bay Training Area. The next day a defect occurred on one of the six transformers which form part of the ship’s propulsion system which reduced the ship’s propulsion power by 50 per cent.

The ship’s Commanding Officer decided to return to Sydney in order to have the defect rectified.

The Navy has been advised by the ship’s previous operator, the Royal Fleet Auxiliary, that the defect is very unusual. The Fleet Commander, Rear Admiral Tim Barrett, said: “A technical investigation has begun to identify the possible cause of the defect”.

Navy and the Defence Materiel Organisation are working extremely closely with the original manufacturer of the transformer to have it repaired and the ship return to sea as soon as possible.