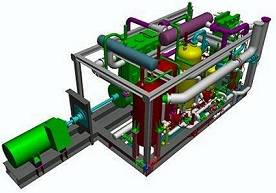 The new reliquefaction plant design from Babcock's LGE Process showing the vent gas cooler (in yellow) in the middle of the skid-mounted unit.

Dorian/Seacor‘s liquefied petroleum gas (LPG) carriers are to benefit from the latest reliquefaction plant development from Babcock’s LGE Process, following a contract signed last month (May) for the innovative vent gas cooler enhancement to be fitted on two new very large gas carriers (VLGCs) being built for Dorian/Seacor in South Korea, with an option for a possible further three vessels.

The latest plant design enhancement (patents pending) from Babcock’s LGE is based on the innovative application of known and proven technology, to offer reduced capital and operating costs without compromising efficiency and operability. The novel vent gas cooler (VGC) enhances the reliquefaction systems used on gas carriers transporting LPG, ammonia and petrochemical gases with valuable efficiency, flexibility and environmental benefits.

The improved coefficient of performance (COP) of the plant – ie increased refrigeration capacity for the same electric power and seawater consumption – is one of the primary benefits of the VGC from which the Dorian/Seacor LPG carriers will benefit. By installing the VGC between the second and third stages of a three-stage compression system on large carriers, increases of 10-15% in the COP can be achieved. This increased capacity allows conventional four compressor systems to be replaced by three slightly larger ones.

The system has been ordered by Dorian/Seacor for two new fully refrigerated 84,000 m³ VLGCs to be built for the company at the Hyundai Heavy Industries (HHI) shipyard in South Korea. As a result, these vessels will benefit from a three-compressor solution, with increased capacity and performance, reduced power consumption, and a lower overall build cost.

The vessels are due for delivery in 2014.