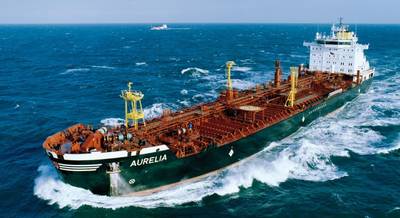 Tanker AURELIA, Shipping Company Carl Büttner GmbH & Co.KG, Length 168 m, 24.000 to (tDW)
The Würzburg-based Babcock Noell GmbH and the Bremen-based shipping company Carl Büttner have agreed to equip a tanker of the Büttner fleet with a BNG Scrubber for precipitation of SOx
Babcock Noell GmbH, a company of the Bilfinger Group, has designed and built various turnkey desulfurization systems, scrubbers for power plants and industrial plants during the past 40 years. This long-term experience is the fundament for developing a scrubber for ships. At Babcock Noell all engineering capacities are available to offer turnkey solutions also for the maritime industry. Being integrated in the Bilfinger Group, Babcock Noell can ensure services for maintenance and operation of the scrubber worldwide.
Carl Büttner’s fleet operates almost exclusively along the European coasts and is therefore suited for showing the technical and economic benefits of the system.
While in Europe these past years the focus was on minimizing airborne emissions from power plants, it has now shifted to ships. Ships are powered by heavy fuel oil, which contains a certain percentage of sulfur that is released as sulfur dioxide and causes air pollution. Emission Control Areas – ECA – were established to improve the air quality, in particular close to the coasts. At present, the North Sea and the Baltic Sea, as well as the coasts off North America belong to these areas, which are to be expanded further in the coming five to ten years. In the period between 2020 and 2025, the sulfur content of the fuel will be limited to a maximum of 0.5 percent of sulfur, with the existing stricter ECAs continuing to limit the sulfur content to 0.1 percent during that period.
As of 1 January 2015, ships in the Emission Control Areas may only use low-sulfur fuels with a maximum sulfur content of 0.1 percent or, alternatively, need to be equipped with desulfurization systems. As low-sulfur diesel is very expensive compared to the standard diesel, scrubbers represent a significantly more economical solution in many cases.
The BNG Scrubber for the tanker MT Aurelia of the shipping company Carl Büttner is designed as a hybrid system, which means that both the open-loop and closed-loop methods can be implemented. In the open-loop system, the outgoing exhaust gases containing sulfur are washed with seawater, which may then be discharged into the sea after being treated according to the legal requirements. The closed-loop method eliminates any discharge of process water in particularly protected areas.
The BNG Scrubber’s sophisticated multi-stream concept is a trendsetting task for the team of experts at Babcock Noell and for the experienced advisory team at Carl Büttner. This concept enables dedusting and scrubbing the flue gases of two main engines (3 + 4 MW), of the two auxiliary engines, and the boilers.
According to the developer, the BNG Scrubber features the following system characteristics: system design chosen ensures cost-optimized operation of the BNG Scrubber, compact design, use of non-corrosive materials based on long-term experience with highly corrosive flue gases, use of low-maintenance system components and high system availability thanks to system redundancy of vital system components.
Special attention is paid to the design of the scrubber process water treatment; a substream of the process water is treated in a unit for precipitating heavy metals. Hence, the selected technology exceeds the present legal requirements.
Babcock Noell implements the project as a turnkey solution with Babcock Noell’s scope of responsibilities covering the dockyard works and all design services. The customer benefits as time-consuming and costly interface coordination is eliminated.
• Baltic Sea • Bremen • economical solution
Email