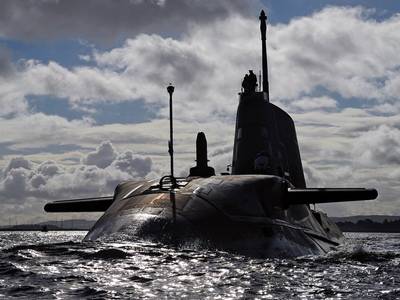 The Ministry of Defence awards the contract for 'Audacious', the latest Astute Class attack submarine to be built for the Royal Navy.

Audacious is the fourth of 7 Astute Class submarines being built for the Royal Navy. They are the most technologically-advanced the Royal Navy has ever sent to sea and offer a step-change in capability.

The contract with BAE Systems will safeguard 3,000 skilled jobs at Barrow-in-Furness in Cumbria and represents a significant step forward in the Astute submarine programme.

Ambush's ability to dive and surface has been successfully tested, as has her propulsion system, and the third boat, Artful, is reaching the final stages of her construction at Barrow shipyard.

The MOD also confirms that a further £1.5 billion has been committed to the remaining 3 submarines in the class. This has enabled early build work to start on the next boat (Anson) and long lead items to be ordered and bought for the as yet unnamed boats six and seven.

Featuring the latest nuclear-powered technology, the Astute Class never need to be refuelled and can circumnavigate the world submerged, manufacturing the crew's oxygen from seawater as they go.

The 7,400-tonne submarines are quieter than older submarines and can operate covertly and remain undetected despite being 50% bigger than the Royal Navy's current Trafalgar Class submarines.