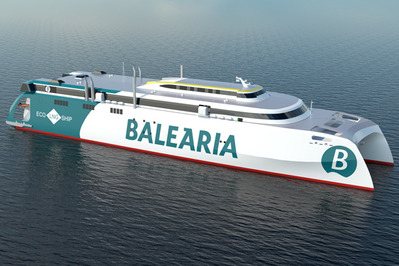 The shipping line Baleària, a pioneer in the application of liquefied natural gas in sea transportation, has marked another milestone with the construction of the world's first passenger and cargo fast ferry powered by dual LNG engines.

The fast ferry is being built at the Armon shipyard in Gijón, as announced yesterday by Baleària President Adolfo Utor at the inaugural conference of the 57th Naval Engineering and Maritime Industry Congress currently being held in Valencia.

Capacity and investment
With a length of 125 meters and a beam of 28 meters, the new catamaran will have capacity for 1,200 passengers and 500 cars (or otherwise trucks measuring 500 meters in length and 250 cars), making it furthermore "the longest and highest-capacity fast ferry catamaran currently in existence," explained Mr Utor.

The vessel will be propelled by four Wärtsilä dual LNG/diesel engines delivering 8800 kW each, allowing it to attain a service speed of 35 knots, and a top speed of over 40 knots. It will also be equipped with two tanks to store the liquefied natural gas, giving it a range of 400 nautical miles. Meanwhile, the bow of this innovative aluminium ship has been specially designed to combine performance improvements derived from vertical bows on the side hulls, with the incorporation of wave piercing. It should be emphasized that the ship's design complies with the most demanding environmental and energy efficiency standards.

Baleària will be investing 90 million euros in the construction of this fast ferry, with aluminium cutting scheduled to begin in December, and entry into service in summer 2020.

Smart ship
The new ship forms part of the smart concept being developed by Baleària, comprising the application of new technologies, big data and artificial intelligence through the digitization of ships and maritime terminals, in the interests of energy efficiency and passenger care services.

The passenger areas, with accommodation for 1,200 passengers, are innovative in terms of both their design and leisure and entertainment services. As for passenger comfort, vertical acceleration has been considerably reduced, resulting in more comfortable crossings, while vibrations and noise have also been significantly improved.

Natural gas pioneers
"The use of liquefied natural gas allows us to fulfil our commitment to the environment and energy efficiency, while also remaining one step ahead of the new pollutant gas reduction regulations scheduled for 2020," according to Baleària President Adolfo Utor, who likewise emphasized in his address the shipping line's enthusiasm for innovation.

Baleària is also finalizing the construction of what will be the first two smart ships with LNG engines to sail the Mediterranean. The Hypatia de Alejandría is scheduled to begin operations early next year, followed by the Marie Curie a few months later. Meanwhile, the first of a total of six ships in the fleet will have its engine replaced this autumn to allow it to sail under liquefied natural gas propulsion. The European Union recently gave a rating of 'excellent' to the project, which will be undertaken over the course of the next two years, awarding Baleària a grant of some 12 million euros out of the total investment 72 million euros.

Within the next three years Baleària plans to have at least half of its ferry fleet using this clean energy to sail, rising to a hundred percent of the fleet within ten years.

Liquefied natural gas is one of the most environmentally friendly fossil fuels. It serves to reduce CO2 emissions by 30% and NOx by 35%, while completely eliminating sulphur and particles, with an immediate effect in improving air quality and reducing the greenhouse effect.

It should be pointed out that the shipping line been working with LNG-related projects since 2012. Aside from being a founding member of GASNAM (the Spanish National Gas for Mobility Association), set up in 2013, it maintains strategic agreements with Naturgy (with an exclusive LNG supply guarantee agreement running up until 2030) and with the manufacturers Rolls-Royce and Wärtsilä (to build the engines). Meanwhile, the first LNG electricity generator on a passenger ship began operation last year on the Abel Matutes, and the company has also had an LNG training plan in place since 2015 for its crew members and ship inspectors.

BC Ferries' Newbuilds Ready for Trials

Schottel won a contract to provide propulsion units for a new harbor tug under construction at Tongfang Jiangxin Shipbuilding in China.