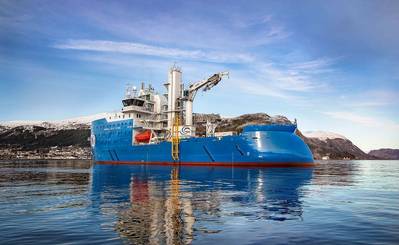 The battery hybrid vessel will work at the Merkur offshore wind farm offshore Germany, where it will be operating for GE Renewable Energy.

The vessel is based on the ULSTEIN SX195 design from Ulstein Design & Solutions AS. The Windea Jules Verne measures 93.4 m in length and 18m in the beam. It has accommodation for 120 people.

The vessel will serve as a ‘home away from home’ for offshore wind service engineers as well as the ship’s crew.

"Much effort has been placed in keeping comfort high for those on board. Firstly, the X-BOW® and X-STERN™ lead to softer motions in head seas, significantly reducing slamming and vibrations. This leads to increased quality of sleep and rest when off shifts. There are also several lounges in close connection to the mess room, a gaming room, a library, saunas, and an exercise room," Ulstein said.

The vessel is equipped with a large, centrally positioned W2W motion compensated gangway & elevator tower for personnel and cargo transfers.

Besides the usual way of operation with the bow to the weather this vessel can move backwards with the stern first when operating infield and will as an add-on use a daughter craft to further increase the service capacity.

GE contracted Bernhard Schulte in July 2018 to provide an SOV for the 396MW project in Germany, after which the German company placed the order with Ulstein Verft.

The SOV  will be used by the GE operations team at the Merkur Offshore wind farm where it will support the maintenance of the 66 GE Haliade 150-6MW turbines.

Beneath the decks of vessels across the U.S. a quiet revolution is underway. Inside their underbelly is a high-tech set of…