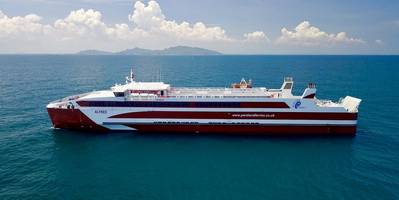 The vessel is the latest in a series of collaborations between Strategic Marine and BMT, which now includes a variety of ferries and the extensive portfolio of windfarm support vessels, with the partnership continuing to expand. The MV Alfred, delivered on Thursday, August 29th, was named after the father of Andrew Banks, the owner and managing director of Pentland Ferries.

Designed by Southampton-based BMT, construction began in mid-2017 at Strategic Marine’s Vung Tau facility in Vietnam. Launched in January 2019, with sea trials over the summer, the vessel has now completed the long voyage from Vietnam and arrived at her home port in the Orkney Islands earlier this week.

MV Alfred will operate in the rough waters of the Pentland Firth, between Gills Bay on the Scottish mainland and St Margaret’s Hope, Orkney, with a transit time of around one hour. Entry into service is planned for later this year and, the vessel will significantly expand the operator’s capacity on the route, carrying up to 430 passengers and 98 cars, or 12 lorries with 54 cars.

Powered by four Yanmar 6EY17W engines and quad-screw propulsion, the low-emissions vessel is quiet and efficient, achieving a service speed of 16 knots. With a hull form specifically designed for the area of operation, the new vessel ensures a comfortable transit for those onboard, and maximum operability for the vessel’s owners.