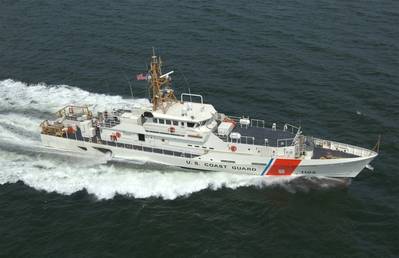 It has a flank speed of 28 knots, state of the art command, control, communications and computer technology, and a stern launch system for the vessels 26 foot cutter boat.

The FRC has been described as an operational “game changer,” by senior Coast Guard officials.

The Coast Guard took delivery March 21, 2013 in Key West, Florida and is scheduled to commission the vessel in New Orleans, Louisiana in June, 2013.

Each FRC is named for an enlisted Coast Guard hero who distinguished him or herself in the line of duty. This vessel is named after Coast Guard Hero, Margaret Norvell for serving admirably for 41 years with the U.S. Lighthouse Service in Louisiana from 1891 to 1932.  Her devotion to duty saved the lives of countless sailors as she vigilantly stood the watch. Norvell served as keeper of both the Port Ponchartrain Light and the West End Light.

The announcement was made by Bollinger executive vice president of new construction, Chris Bollinger, “We are very pleased to announce another successful on-time delivery to the Coast Guard.  The Margaret Norvell was delivered to the 7th Coast Guard District in Key West, FL, and will be stationed at USCG Sector Miami.  We are all looking forward to the vessel’s commissioning, as well as honoring and celebrating the heroic acts of Margaret Norvell.”