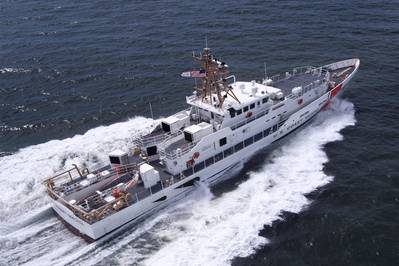 The announcement was made by Bollinger executive vice president of new construction, Chris Bollinger:  “We are very pleased to announce another successful on-time and on-budget FRC delivery to the Coast Guard.  The Paul Clark was delivered to the 7th Coast Guard District in Key West, FL, and will be stationed at USCG Sector Miami.  We are all looking forward to the vessel’s upcoming commissioning, as well as honoring and celebrating the heroic acts of Paul Clark.”

The 154 foot patrol craft Paul Clark is the sixth vessel in the Coast Guard's Sentinel-class FRC program. To build the FRC, Bollinger Shipyards used a proven, in-service parent craft design based on the Damen Stan Patrol Boat 4708.  It has a flank speed of 28 knots, state of the art command, control, communications and computer technology, and a stern launch system for the vessels 26 foot cutter boat.  The FRC has been described as an operational “game changer,” by senior Coast Guard officials.

Each FRC is named for an enlisted Coast Guard hero who distinguished him or herself in the line of duty. This vessel is named after Coast Guard Hero, Fireman First Class Paul Clark, who displayed fierce bravery in the highest traditions of military service during the allied assault on French Morocco during World War II.  Clark served as a landing boat engineer and beach master on the USS Joseph T. Dickman.  Clark displayed extraordinary devotion to duty in the face of enemy fire as he transferred an injured fellow crewmember to safety on the USS Palmer, then courageously returned to his station at the beach to complete the mission.

SCHOTTEL has been awarded orders in the Norwegian fishery segment. Sefine Shipyard in Turkey has won the contract to build…