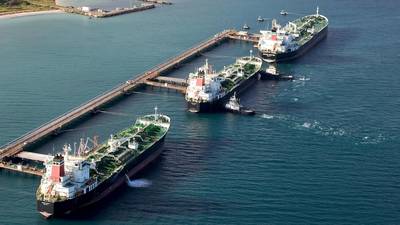 Increased offshore hydrocarbon exploration activities in offshore destinations and growth in marine trade due to rise in import-export activities contribute to the overall growth of the global bunker fuel market, said a report published by Allied Market Research.

However, stringent government regulations regarding the use of bunker fuel such as residual fuel oil (RFO) containing pollutants such as sulfur and nitrogen that are capable enough to disturb the marine life cycle restrain the market growth.

Conversely, expansion of bunker fuel business by the market players in emerging economies such as India and China would create lucrative opportunities for the market.

The residual fuel segment was the largest in 2017, holding a market share of 60% and would maintain its dominance through 2025. This is because the fuel is cheaper than alternative fuel MGO and so is widely used by shipping companies in their transport vessels.

Nevertheless, the marine gas oil (MGO) segment would witness the fastest CAGR of 14.5% from 2018 to 2025. This is due to the environmental regulation imposed by the international maritime organization (IMO) on the use of sulfur in the marine fuel in order to reduce the marine pollution, leading to the growing use of MGO as alternative marine fuel.

The oil majors segment grabbed the largest share of 41.5% in 2017 and would maintain its revenue lead throughout 2025. This is because it is involved in trading of marine fuel across the world as well as the production of marine fuel.

The large independents segment would witness the fastest CAGR of 9.9% through 2025 because these distributors trade marine fuel across the main regions in the world including Asia Pacific (Singapore), Middle East (UAE), Europe (Rotterdam), Americas (US gulf), which are responsible for around 60% of all bunker sales globall

Regionally, Asia-Pacific grabbed 46% of the overall market share in 2017 and would dominate the market through 2025. This is due to the presence of world's major commodity consumption centers in this region. However, North America would register the fastest CAGR of 10.2% through 2025, owing to rise in sea borne trading of chemical products as well as surge in need for plastic feedstock in the region.

FinCo Fuel Group announced on Monday it has acquired a majority stake in GoodNRG, holding company of renewable fuels firm…