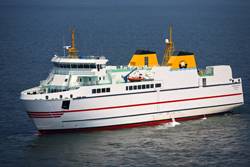 The new 85.37m GRAND MANAN ADVENTURE passenger/vehicle ferry has returned back to Black’s Harbour, New Brunswick after being drydocked at a shipyard in Halifax, Nova Scotia due to an internal mechanical failure of one of the two 470 kw electric motor driven bowthrusters.

Eastern Shipbuilding Group, builder of the ferry from Panama City, Florida, and Berg Propulsion, each sent representatives to Halifax, to oversee the repairs and ensure the ferry’s timely return back to service. Eastern and Berg took further precautions and preventative measures which included opening up the second bowthruster for full inspection to insure a similar problem would not occur. Project representatives from New Brunswick’s Department of Transportation and Infrastructure were on hand to witness the repairs. “We are pleased with the cooperation shown by the Eastern Shipbuilding Group in addressing this issue. The new ferry will carry passengers between Grand Manan Island and the mainland in comfort and safety for many years to come,” said Transportation and Infrastructure Minister Claude Williams.

During the offseason, the GRAND MANAN ADVENTURE will replace the GRAND MANAN V, the older ferry in operation since 1990, which will be laid up until the opening of next season when both ferries will operate simultaneously carrying residents and visitors back and forth from the mainland to Grand Manan Island.