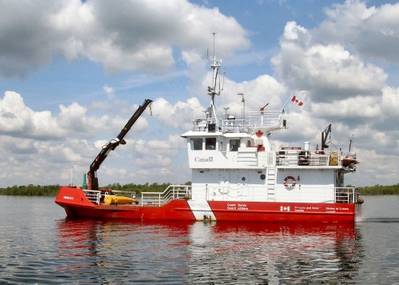 The Canadian Coast Guard (CCG) announced a pair of initiatives aimed at reducing its greenhouse gas emissions, including the start of a biodiesel testing project and the launch of the next phase in the construction of the Government of Canada’s first hybrid electric vessel.

Earlier this month, following the award of a contract to procure biodiesel from Windsor, Ontario based Sterling Fuels, CCG became Canada's first government agency to trial a 20% biodiesel blend in one of its vessels, the navigation aids tender CCGS Caribou Isle. Over the next months, various biodiesel ratios will be tested to assess operational feasibility and technological compatibility of higher blend rates across various operational settings.

Biodiesel is a diesel fuel substitute used in diesel engines made from renewable materials such as plant or fish oil, waste cooking oil, animal fat, or agriculture and forest biomass. The test project will assist in advancing solutions to decrease emissions in the immediate term.

In addition, the CCG is preparing for construction of a new hybrid electric Near-Shore Fishery Research Vessel (NSFRV) to reduces consumption of diesel. Following the design and engineering work for a vessel class fitted with a battery energy storage system, the CCG has issued a request for proposal to Canadian shipbuilders to start construction of one vessel.

The new hybrid NSFRV project is a National Shipbuilding Strategy initiative under the Canadian Coast Guard’s fleet renewal plan efforts. The project will procure, deliver and outfit a vessel to replenish the NSFRV fleet and increase fishery science capacity to the St. Lawrence River and Gulf. NSFRV s provide support to the Fisheries Science, Oceans Science, and Habitat Management & Environmental Science by fostering innovation through research in expanding sectors such as aquaculture and biotechnology.

Mario Pelletier, Commissioner, Canadian Coast Guard, said, “This new electric hybrid powered vessel and the use of biodiesel in our fleet have the potential to become a watershed moment in future shipbuilding and green fuel use. These initiatives gives us reasons to be proud and to be hopeful. Congratulations to all Canadian Coast Guard personnel and project stakeholders on achieving these latest milestones.”