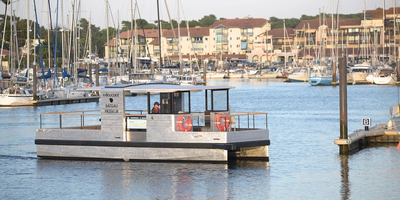 Capbreton is turning to green technologies to reduce pollution of its air and waterways.  The popular holiday destination on the Atlantic coast of France saw its first all-electric passenger ferry go into service in July 2019, replacing an older diesel-burning vessel.

The 10-meter aluminium catamaran has a top speed of eight knots and typically cruises at an economical three knots in the harbor. The operator estimates that the boat can run up to 20 hours between shore recharges. L2O Naval, based in L’Orient, designed the ecologically responsible vessel, which was built by Idra Navacco.

Mitsui O.S.K. Lines, Ltd. and e5 Lab. concluded a Memorandum Of Understanding (MOU) to conduct a joint study of a hybrid…