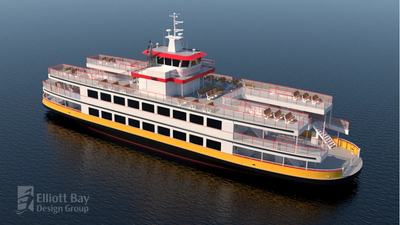 Maine ferry operator Casco Bay Lines has committed to an integrated hybrid-electric power and propulsion solution for its new vessel, in a technology step change along one of the longest-established ferry routes in the United States.

The new 50-meter ferry will feature ABB Marine & Ports’ hybrid power, propulsion and a shore charging system, supporting diesel-electric and zero-emissions battery-powered modes, as well as a combination of both. With the ferry operating in zero-emission mode, the passengers will benefit from a smoother, quieter and cleaner ride. The vessel is expected to cut up to 800 tons of carbon dioxide per year, helping to improve air quality in Portland, Maine.

In line with U.S. governmental commitments to reduce the environmental impact of public service transit systems nationwide, the ferry project has been partially funded by federal and state grants, with a 15-vehicle and 599-passenger capacity vessel to replace an existing diesel-powered ferry for the Portland–Peaks Island service along the coast of Maine.

“Hundreds of thousands of passengers ride the Casco Bay Lines ferry between Portland and Peaks Island each year,” said Hank Berg, General Manager of Casco Bay Lines. “Increasingly, ferry passengers prioritize sustainability as a service expectation, in addition to reliability and comfort. The ability to switch to zero-emission battery power in port is also a clear environmental benefit for residents in Portland and Peaks Island.”

Within its integration, engineering, automation and equipment supply roles, ABB will deliver the Onboard DC Grid power distribution system to give full control over when and how the vessel uses its diesel generators, the 904-kWh battery energy storage system or a combination of the two to optimize energy consumption at any load. ABB is also supplying an automated shore charging system for installation at the Port of Portland, which automatically connects at the dock and will not require any additional port time to charge the vessel.

Smooth running, remote monitoring and predictive maintenance will be supported through the inclusion of the ABB Ability Remote Diagnostics System in the vessel, ABB Said.

Hybrid and electric solutions for ferries are on the rise, with more than 130 battery-powered ferries already in operation and more than 90 on order, according to the Maritime Battery Forum.

ABB said its complete, integrated solutions for hybrid and electric vessels are increasingly selected by ferry operators worldwide and in the U.S. Recent successes have included a fleet renewal project for Washington State Ferries, the largest ferry system in the country, while ABB also supplied power and propulsion package for the latest Maid of the Mist Niagara Falls tour ferries – the first fully-electric newbuilds built in the U.S.