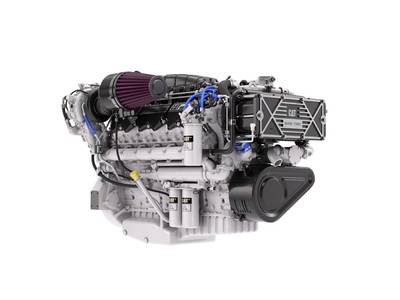 The C32 ACERT marine propulsion engine is available at ratings that meet both EPA Tier 3 and IMO II emissions regulations, while still offering seven Wide Operating Speed Range (WOSR) ratings. The C32 now has a separate circuit aftercooling system (SCAC) for three power ratings, ‘A’ through ‘C.’ The SCAC system is a significant benefit for customers as the system removes seawater from the coolers, resulting in longer service intervals. Additionally several design changes have been engineered into the platform to lower operation costs, including longer oil change intervals. Customers will also be able to select from an increased amount of attachments and options when ordering the C32 ACERT Tier 3 engine, including a class-approvable alarm and protection system.

Other benefits include the proven engine’s extensive operating history and performance iron with thousands of validation testing hours for quality and durability. The C32 ACERT marine engine is backed by the stellar product service and support of the extensive Cat global dealer network as well as Caterpillar’s 60 month standard warranty.

“We’ve been very pleased with the success of the C32 in the field. We have accumulated over 50,000 hours of field testing to date, specifically in workboat applications.” Chad McIntosh, Caterpillar product definition manager said. “Built on the proven performance of the trusted C32 platform, the new C32 offering provides customers with design enhancements as well as the flexibility to operate in regulated waters with a Tier 3 certified power plant.”