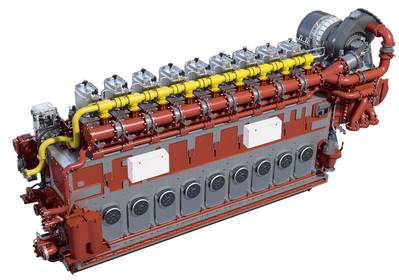 The certification of the MaK range provides customers operating in the American market, specifically in the commercial and offshore marine markets, a spectrum of power nodes to meet emissions regulations on U.S. flagged vessels.

The M 34 DF dual fuel engine boasts a power rating of 500 kW per cylinder at 720 and 750 rpm in diesel and gas modes, and will share the same footprint as the highly successful M 32 C engine series. The M 34 DF will be capable of running on natural gas as an alternative to marine diesel oil or large and complex scrubber installations for Emission Control Areas (ECA) operation as of 2015. Driven by upcoming fuel sulfur and NOx regulations in ECA, the M 34 DF will provide full flexibility for vessels operating in regulated and/or lesser regulated areas without major changes to the engine room or exhaust gas system, supporting the ease and simplicity of engine installation and certification. Although designed for unlimited operation on LNG, marine diesel oil and heavy fuel oil, the M 34 DF will reach industry-leading efficiency in gas mode, while operating as EPA Tier 3 certified.