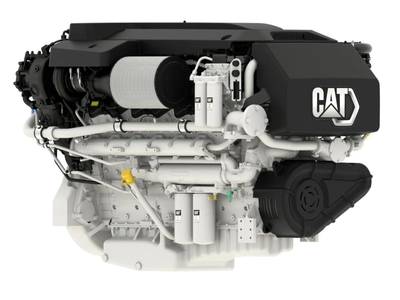 Following the launch of the C32B 2025 MHP engine, Caterpillar Marine has announced the release of the new Cat C32B Triple Turbo 2433 MHP (2400BHP) high-performance marine engine, with a rated engine speed of 2,300 rpm.

With a 20% increase in power output, the C32B Triple Turbo engine leverages the same core engine upgrades as the C32B 2025 MHP rating while offering additional features and benefits, the manufacturer said. The C32B 3-Turbo is geared toward yachting, sportfishing and governmental applications.

The C32B Triple Turbo engine has something to offer for everyone in the high-performance segment, such as higher vessel speed for sport fishers, more environmentally friendly options (IMO III SCR) for motor yachts, and 2025 MHP Intermittent Duty classification for governmental applications, Caterpillar Marine said, adding that the  C32B was designed with repowers in mind to provide more power and life to existing vessels.

The Cat C32B Triple Turbo engine will be available to order in late 2021 and comes with warranty coverage.

In continuously developing the range of services for its portfolio of four-stroke engines, MAN Energy Solutions enables its…