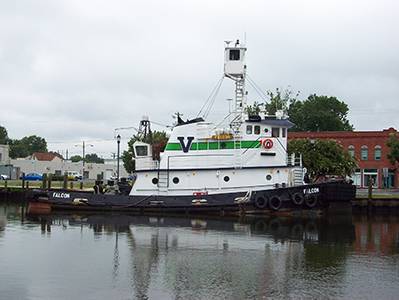 The tug Falcon was built by Modern Marine Inc. in 1978. In the intervening years, companies that employed her have changed hands a number of times until 2013 when Vane Line Bunkering of Baltimore, Maryland purchased Kirby Marine’s Philadelphia bunkering division.
The parent company, Vane Brothers, immediately began plans to update and upgrade the classic 75x25-foot tug. Central to this was the repower of the vessel. They arranged with Cummins Power Systems to replace the boat’s pair of aging Detroit 12V71s with modern Cummins K38-M engines. The U.S. EPA compliant Tier 2 engines, each delivering 1,000 horsepower, have proven themselves in the first few months of operation and, together with other upgrades, promise the Falcon many more years of productive work life.
With more than a century in the maritime business and dozens of tugs working at various ports along the U.S. Atlantic Coast, Vane Brothers continues to expand its fleet and services through steady, managed growth.
• Maryland • Environmental Protection Agency • Atlantic coast
Email