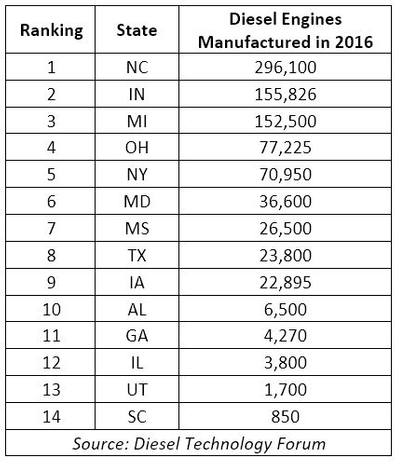 According to new analysis by the Diesel Technology Forum, manufacturing of clean diesel technology for the heavy-duty equipment market plays a vital role in the U.S. economy, especially for the local economies of 14 key states.

“As we recognize Manufacturing Day on October 6, there is no better example of industry leadership in manufacturing than the new generation of clean diesel technology,” said Allen Schaeffer, executive director of the Diesel Technology Forum. “In 2016, American manufacturing facilities produced more than 740,000 heavy-duty diesel engines that can be found in everything from commercial trucks and buses, construction machines and agricultural equipment, to the largest application like locomotives, marine workboats and industrial engines.”

Clean diesel technology supports one out of every two sectors of the American economy. Agriculture, forestry, mining, construction, logistics, warehousing and other goods movement industries supporting retail and the larger manufacturing sector depend on diesel-powered vehicles and equipment.

“Today’s diesel engines, both large and small, are more energy-efficient, powerful, reliable and cleaner than ever before,” continued Schaeffer. “Thanks to decades of continuous improvement and innovation by diesel engine and equipment makers and suppliers, diesel power continues to be the technology of choice for 15 sectors of the global economy.”

According to economic estimates compiled by the Diesel Technology Forum, manufacture of clean diesel engines, along with the vehicles and equipment they power, the maintenance of technology and the production of fuel, support 1.25 million jobs across the United States. On average, these jobs pay 60 percent more than the average national salary. Recently, the Association of Equipment Manufacturers concluded that the production of diesel-powered equipment will support 1.3 million jobs and generate $158 billion in economic value. Overall, the average wage in the diesel manufacturing industry exceeds the national average, paying workers about $78,000 per year.

“On top of the economic benefits derived from the manufacture and use of diesel-powered equipment, clean diesel technology offers significant emission reductions and fuel savings,” said Schaeffer. “Diesel-powered trucks, trains, ships and intermodal systems move more than 80 percent of all cargo in the U.S. and more than 90 percent throughout the world. With the introduction of ultra-low sulfur diesel fuel, selective catalyst reduction and diesel exhaust fluid, diesel has become one of the cleanest, most energy-efficient and lowest cost options for heavy-duty use.”