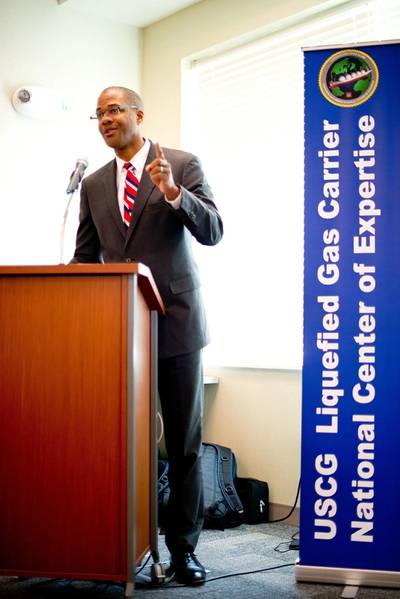 Chris Smith, the Department of Energy assistant secretary for Fossil Energy, speaks at Sector Houston-Galveston Dec. 9 to prepare for the increased use of liquefied gases throughout the maritime community and gain a deeper understanding of the intricacies each party faces as they adapt to the rapid growth in this multibillion dollar industry. (U.S. Coast Guard photo by Andrew Kendrick)

Senior U.S. Coast Guard leaders and liquefied-gas-industry experts from around the country came together the second week of December at Sector Houston-Galveston to prepare for the increased use of liquefied gases throughout the maritime community and gain a deeper understanding of the intricacies each party faces as they adapt to the rapid growth in this multibillion dollar industry.
The maritime community is experiencing an international shift with the increased transport and use of liquefied gases. The increased supply created by the U.S. energy renaissance and environmental limitations put in place by the U.S. Emissions Control Area (ECA) are further expanding this growth here in the U.S. with an abundance of low cost and clean fuel for export and use in ports all around the country. New import and export facilities, as well as liquefied gas fueled vessels and bunkering operations are either already underway, or soon to be kicked off in roughly 60 percent of ports the Coast Guard oversees.
Department of Energy Assistant Secretary for Fossil Energy, Chris Smith, whose career in the private sector included work on an import facility now being fitted as an export terminal, provided the forum’s keynote remarks.
Smith said the ability to extract oil and gas out of shale formations is an important energy evolution globally in terms of new technology.
“The United States, for the first time in decades, is producing more oil and natural gas, here, domestically, than we import from other countries. So it’s a significant impact that this technological change has had,” Smith said.
He closed his remarks by saying the advancements in gas extraction present a good opportunity for the United States, a good opportunity for American consumers, and a good opportunity for American businesses. There is also great interest internationally in how this business evolves.
More than 70 Coast Guard leaders attended, including the 8th District Commander, Rear Adm. David Callahan, and Captains of the Port from around the country. Personnel from the Department of Energy, Federal Energy Regulatory Commission, National Oceanic and Atmospheric Administration, and the Maritime Administration and close to 200 industry representatives took part in the event.
The three day event, hosted by hosted by the Coast Guard’s Liquefied Gas Carrier National Center of Expertise in cooperation with The Society of International Gas Tanker and Terminal Operators (SIGTTO) and The Society for Gas as a Marine Fuel (SGMF), included educational information on topics such as liquefied gas carriers, liquefied gas import and export facilities, use of liquefied gas as a marine fuel, and liquefied gas bunkering operations. Rapid-fire presentations by 39 presenters covered current Coast Guard policy and maritime liquefied-gas projects either underway or proposed throughout the U.S. The forum also included a training session with Sandia National Laboratory and Texas A&M Firefighting discussing risks associated with and measures to mitigate the risks for liquefied gases. In addition, Cheniere Energy held a live liquefied-gas demonstration and the attendees made a visit to Conrad Shipyard in Orange, Texas, where the nation’s first liquefied gas bunker barge is being built, and to Cameron LNG’s re-gasification and liquefaction facility.
• Cheniere Energy • Chris Smith • Conrad Shipyard
Email