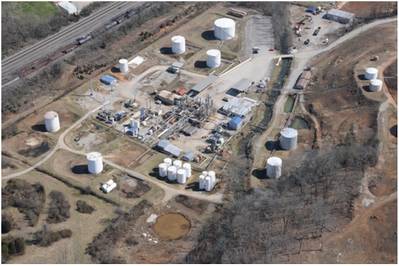 Today Continental Refining Company, LLC announced a new product offering for the marine market with the production of low sulfur marine diesel, a special blend distillate fuel that has a T-90 greater than700° f, less than 1,000 ppm sulfur for use in the ECA 1 Operating Zones for Category 2 and 3 marine engines. It is similar to DMA grade Marine Gasoil.

Continental Refining Company is already selling low sulfur marine diesel(T-90 700) on the east coast(ECA1) where it is destined for oceangoing markets. The refinery has the capacity to produce 30,000 barrels per month. The reduced cost versus using ULSD for this diesel fuel is a strategic advantage in the competitive international fleet shipping business. By refining additional T-90 700 for domestic use, Continental Refining Company could pass on savings of 10 cents per gallon, or $4.20 per barrel, to domestic Category 2 and 3 diesel engine users. This applies toGreat Lakes shipping users and tug and towboats that move barges through U.S. rivers and lakes. This shipping accounts for 79% of domestic waterborne tonnage according to American Waterways Operators (AWO). Based on geography, the primary market for the refinery’s T-90 700 supply is the Ohio River.

“Expanding into niche markets enables Continental Refining Company to continue to grow, remain competitive and strengthen our long-term prospects in Somerset, KY. Providing low sulfur marine diesel as a low cost fuel option to American Lakers and towboats while meeting ECA Area 1 standards is smart business for freight operators and consumers when you consider that one towboat has the carrying capacity to push 40 barges – that’s 2,400 trucks that don’t have to clog up U.S. highways,” explained Continental Refining Company CEO Demetrios Haseotes.

$2M is slated for investment in a Maxim Processing unit to increase transmix processing capacity over the next 18 months. Transmix is a type of fuel that is created when different fuels mix together in the fuel distribution system. Because transmix contains a mixture of different fuels, it cannot be sold without further processing and is more difficult to process than other types of fuel. Transmix processors provide a valuable service by making sure that these mixtures of fuels do not create bottlenecks in the fuel distribution system and that the fuel is used rather than discarded. To date, there are less than 15 plants processing transmix in the United States.

Haseotes continued, “We realize it is a challenge to process transmix and we welcome that challenge with the most advanced technologyin the industry. Having our Transmix Compliance Plan approved by the Environmental Protection Agency would allow us to reuse fuels that would usually be discarded, help prevent bottlenecks in the fuel distribution system and strengthenU.S. energy capacity.”