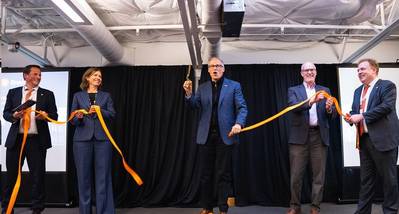 Corvus Energy this week celebrated the grand opening of its new battery factory in Bellingham, Wash., amid growing demand for energy storage systems in the U.S. marine industry.

Located in Fairhaven at the Port of Bellingham, the new battery plant produced its first Orca battery module in November 2022 and has already delivered several orders.

“We have seen a significant uptake in opportunities for maritime batteries from the U.S. market,” said Geir Bjørkeli, CEO of Corvus Energy. “Increased capacity and production flexibility will be key to meeting this anticipated growth.”

Corvus announced plans to open the facility last May as the marine industry accelerates its adoption of decarbonization technology to meet global emissions reduction targets.

“Washington state was a natural choice for Corvus due to its presence of a strong maritime cluster, the state’s focus on green shipping, and the proximity to our Richmond facility in Canada. U.S. presence and close collaboration with shipyards, shipowners, Washington Maritime Blue as well as other suppliers and service providers foster innovation across the entire industry and build valuable competence and local green jobs.”

Ole Jacob Irgens is President Americas in Corvus Energy and leads the sales and business development. He said “We see a big change. Ship owners, designers naval architects as well as electric propulsion integrators in North and South America are turning to Corvus in record numbers, The U.S. factory, along with a more robust sales and service organization, will ensure that we can better service our U.S. customers.”

Irgens continued, “Our customers see great value in Corvus’ investments in North America and our efforts in creating green jobs in local communities such as Bellingham. In addition, it is critical for our customer’s success that Corvus provides local support and service to their operations.”

The Bellingham Plant will produce the modules for Corvus Energy’s Corvus Orca ESS. There have been close to 650 Corvus Orca projects with a combined energy storage capacity of 550 MWh worldwide since the ESS product was introduced for battery-powered marine propulsion in 2016.

The opening ceremony was held with distinguished guests such as the Governor of Washington, Jay Inslee, Norway's Ambassador to the U.S., Anniken Krutnes and U.S. representative Rick Larsen along with customers, industry partners, government agencies and others.

“I am so thrilled to be with you today to celebrate the opening of your new facility,” Inslee said. “Climate change is a huge threat, and it has since long been my dream to build a clean energy economy. I have seen the future when I visited an electric ferry in Norway last year. No fuel – no noise - no vibration – the crew members were thrilled, and they all want to work onboard electric ferries. Bringing Corvus Energy to Washington state is a step in the right direction. I hope for a bright forthcoming industry here in Washington and that it will generate lots of new green energy jobs as we go along.”