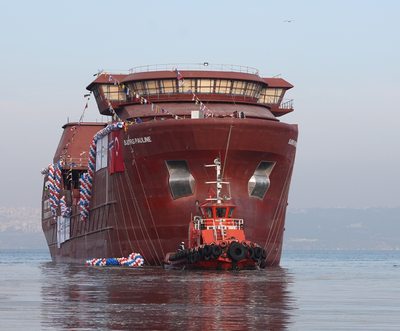 Photo caption: This photo of the sister vessel, Newbuilding 1088 , Bjørg Pauline was taken at the recent vessel launch at Tersan Shipyard. (Photo courtesy of Corvus Energy)

Corvus Energy announced it has been selected by BMA Technology in Turkey to supply the lithium-ion battery-based energy storage system (ESS) for a new Live Fish Carrier to be built at Tersan Shipyard in Turkey.

This is the second vessel in a series of two for Norwegian salmon and trout producer, Nordlaks. Corvus Energy also delivered the ESS for Bjørg Pauline, which was recently launched from Tersan Shipyard.

The NSK Design 4126 – Live Fish Carrier, LNG HYBRID is among the most efficient and most advanced of its type. The 84 meters long and 19 meters wide vessel includes LNG hybrid propulsion (gas-electric with battery package), with a built-in redundancy. The vessel is ice-strengthened to ice class 1A and has shore connections for port operation in addition to several other advantages for flexible and stable transports. Estimated savings is 1864 tons of CO2 per year (equals 30%) in addition to 30% cost reduction.

"Due to slow response and long recovery time of LNG generators, ESS installation on the vessel will serve to guarantee safe and optimal operation, especially during fast load changes. The battery package will be used for peak shaving, spinning reserve, zero-emission operation during low load and to reduce impact of start currents,” says Akın Artun, Technology Division Director of BMA Technology.

Corvus Energy will deliver a 678 kWh battery system for the vessel and the equipment is scheduled for delivery in September 2020. According to plan the vessel will be delivered to Nordlaks in February.