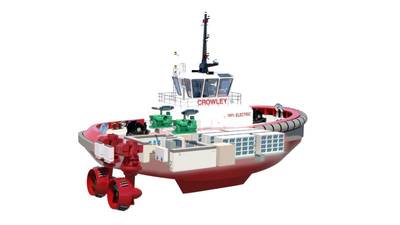 Corvus Energy announced it has been selected by ABB Marine & Ports to supply the energy storage system for Crowley Maritime Corporation's all-electric tug eWolf—the first of its kind in the U.S.

Crowley, which announced its plans to build and operate the innovative harbor tug in July, has tapped Master Boat Builders, Inc., in Alabama to build the vessel and ABB to deliver its integrated electric propulsion system and vessel control technology.

The 82-foot-long vessel will be installed with 6.2 MWh of Corvus Orca Energy battery, which will become an essential part of the complete integrated electrical propulsion system.

Sveinung Odegard, president of Corvus Energy USA, said, "We see increased interest among the tug industry for all-electric propulsion systems. We believe this trend will continue globally due to the proximity to shore and opportunities to eliminate emissions within city limits and harbors. We participated in the first all-electric tug in Europe and are excited to be a part of the efforts by Crowley to build the very first one here in North America."

"Corvus has an impressive track record with marine ESSs and extensive experience on board hybrid and electric vessels. I am pleased to have such a great team of battery experts supporting this breakthrough project," said Dave Lee, senior account manager, ABB Marine & Ports Division.

Upon delivery, the first-of-its-kind tug will support shipping activities in Port of San Diego in California. The vessel is scheduled to be delivered to Crowley in mid-2023.

KOTUG International B.V. and Shift Clean Energy announced the formation of a partnership to use Shift’s new PwrSwäp clean…