Corvus to Supply ESS for BC Ferries Newbuilds 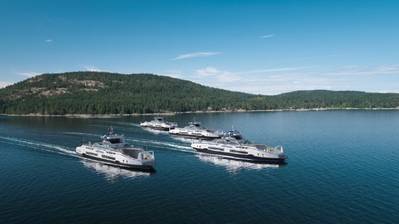 Corvus Energy batteries will be installed on another four of BC Ferries’ new Island Class hybrid ferries under construction at Damen Shipyards. (Image: Corvus Energy)

Corvus Energy reports it has been selected by Damen Shipyards to supply the energy storage system (ESS) for four new battery-hybrid ferries for BC Ferries.

BC Ferries placed a repeat order with Damen Shipyards Group for four Damen Road Ferries 8117 E3 design—known by BC Ferries as the 'Island Class' vessels. The diesel-electric hybrid ferries are prepared for fully battery-powered, zero-emissions operation in the future. Until electrical charging systems are in place, the ferries will use a low sulphur diesel generator and battery hybrid system.

The four new vessels will provide ferry services between Vancouver Island and Quadra and Gabriola islands. Two new ferries will replace one older ferry on each route, resulting in more frequent service, more passenger capacity per hour and reduced vehicle lineups in addition to lower emissions. They join their sister ships—Island Discovery and Island Aurora, the two Island Class ferries of the same design delivered to BC Ferries earlier this year.

The first two Island Class vessels are scheduled to come into service mid-2020 on the Powell River-Texada Island route and the Port McNeill-Alert Bay-Sointula Island route.

These next four vessels are to be delivered in 2022. Two ferries will serve on each of the Campbell River-Quadra Island and the Nanaimo Harbour-Gabriola Island routes.