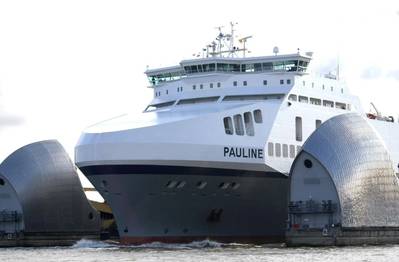 Making good on it's announcement in the autumn of 2015 to ambitiously expand its RoRo fleet, CLdN Ro-Ro SA confirms that two additional ships have been ordered, with options for another four, through the Croatian shipbuilder Uljanik.
European short Sea RoRo specialist CLdN RoRo SA, which operates 24 modern RoRo vessels, offering in excess of 100 sailings per week between the ports of Zeebrugge, Rotterdam, London, Killingholme, Dublin, Gothenburg, Esbjerg and Porto had previously announced its intention to add 12 new vessels to its fleet over the coming years.
CLdN, whose core services have traditionally been the Continent / UK, which commenced in December 1974, have steadily expanded its geographical presence into new markets, including Ireland, Sweden, Denmark and Portugal in recent years
The initial orders, being built at the Korean yard of Hyundai were described as ‘game changers’ at the time of order, offering 8000 lane meters of RoRo capacity. The additional orders are of the same flexible and radical design and offer 5400 lane meters, to accommodate high utilisation of trailers, containers and automotive products in an efficient and environmentally friendly manner, being ‘’LNG ready’’ for straightforward conversion to LNG propulsion.
A company spokesperson described the additional orders as the ‘workhorses’ of our expanding fleet, as they have the durability and flexibility to operate on any of our network and offer complete interchangeability to cater for the demands of our differing trades.
These orders fit with CLdNs ambition to develop an additional 70% capacity over the next four years and the Ports Division, C.Ro Ports has now embarked on preparing Terminal infrastructure to be ready for the arrival of the new ships, which will commence delivery Q3 2017.
• Denmark • Hyundai • Ireland
Email