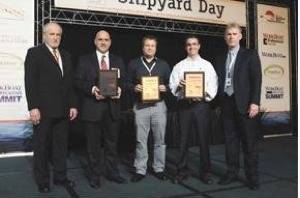 The companies were honored with two significant awards at the recent International Workboat Show (IWS) in New Orleans.

Together Crowley Maritime Corp. and subsidiary Jensen Maritime , the company’s Seattle-based naval architecture and marine engineering firm, were honored with two of the top 10 Significant Boat awards during the seventh-annual International Workboat Show 2012.

The first award was for the design of two Crowley-owned ocean class tugboats , the Ocean Wind and Ocean Wave. The second was for Jensen-designed Murden, a hopper dredge vessel developed for the U.S. Army Corps of Engineers.

"Not only is it an honor to be recognized by Workboat once again, but this nomination is especially poignant because it validates the fact that our ocean class vessels are being recognized for the contributions they are making in terms of design and support to the industry,” said Ara. “They were developed to be the workhorses of our tugboat fleet and to provide unlimited value for our customers in the upstream energy government industries who have need for long-range, high-capacity, ocean towing or salvage and emergency response support.”

The new tugs are ideally suited to work with Crowley's new 455-series heavy lift deck barges , which measure 400 feet by 105 feet and offer increased stability for loads up to 4,200 pounds per square foot. Additionally, the tugs will be outfitted for, and capable of, rig moves; platform and Floating Production, Storage and Offloading (FPSO) unit tows; emergency response and firefighting. These ocean class vessels will also have the capability to support salvage and rescue towing opportunities.

The hopper-dredge Murden, built by Conrad shipyards, of Morgan City, La., is a 156’ by 35’ by 10’ 9” shallow-draft hopper dredge vessel designed to work for the U.S. Corps of Engineers in the shallow harbors of the U.S. Atlantic Coast.