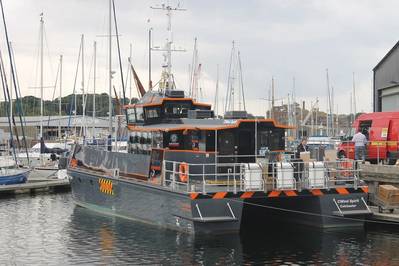 Shipbuilder CTruk Boats, a manufacturer of composite wind farm support vessels (WFSV), has delivered the second workboat in a two-craft order from CWind.
The MPC22 WFSV CWind Spirit was officially named at a ceremony in Ipswich and is the latest addition to a stable of nearly 30 WFSVs built by CTruk.
Like her sister vessel CWind Artimus, which was handed over in June, the latest MPC22 features a a Volvo Penta Integrated Propulsion System (IPS) that reduces fuel consumption, produces less CO2 emissions,  offers extra maneuverability and bollard pull, provides a longer cruising range and enables a higher top speed, the builder said. The IPS, controlled by joystick and driving twin propellers, also offers improved dynamic positioning (DP).
IPS was initially introduced on a CTruk boat operating in the North Sea and has proved its value operating offshore in Continental Europe, where CWind Spirit is also expected to undertake her maiden deployment.
CTruk Chief Executive Officer Andy White explained that the addition of IPS on the two latest craft further expands the range of options CWind can offer to its clients.
“The range of wind farms in planning, construction and operation demands a suitable range of transfer solutions. Given the alternative power and propulsion configurations, the fleet of CWind boats now in use has a wide range of equipment to meet requirements and operational needs,” White said.  “Versatility is an important factor as operators look for greater efficiency in their fleets and this will become even more important as offshore wind farms move further offshore.”
Adding to the versatility of CWind craft is the patented moveable wheelhouse and flexible deck pod system that enables operators to reconfigure the boats in just eight hours, allowing additional deck space to be created overnight.
According to the builder, the MPC22’s versatility extends from transferring 12 technicians in comfort or removing its passenger pod to make use of 72 square  meters of deck space for equipment transfer, carrying cranes, transfer systems and amphibious rescue vehicles such as the CTruk Avenger.
CWInd Spirit has a composite twin-hull with 7.6-meter beam and 1.25-meter draft. It has a 20-metric-ton flexible payload capability and the ability to carry 24,000 liters of fuel, an invaluable function in servicing round 3 zones.
• Andy White • continental Europe • North Sea
Email