Cummins in Honk Kong: Keeping Up the Quality 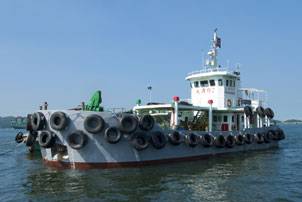 On many older boats from the UK to Canada, and from Thailand to Hong Kong, the deep purr of a well-tuned Gardner diesel wakens fond memories for many mariners. When the British firm discontinued volume production of their standard engines in the early 1990s mariners had to choose another manufacturer to meet their expectations for quality.

In Hong Kong this was made easier by the strong presence of Cummins marine diesels since the early 1980s. Otto C. Y. To, Deputy General Manager of Shun Fung Engineering Ltd, the Cummins dealer for Hong Kong, explained the history of Cummins current popularity in Hong Kong waters. In the early 1980s our Shun Fung company offered new Cummins engines to one of the ports top fishermen. The firm told them to try the new engines, mostly NTA855s, for a year and then buy them or we would remove them at no cost.

The new engines were an instant success with mariners who had expectations based on Gardners renowned reliability. In the ensuing years and with the demise of the Gardner firm’s new manufacture (they still do remanufacture and parts) the Cummins engines have come to take their place in over 95 percent of the large Hong Kong based fishing fleet.

As the vessels in the fleets have grown in size so have the horsepower demands. Today newer vessels are most often built with Cummins KTA19 and KTA38 engines ranging from 500-to 850-horse power. An example of this would be the 41-meter 2002-built trawler Haitian 4. Powered by three engines, the boat has a single Cummins KTA38 flanked by a pair of Cummins KTA19s. This is a common configuration for pair trawlers that fish the South China Sea out of Hong Kong.

Recently Mr. Otto To visited his long-term customers at Tai Hing Hong Oil Co. Ltd. in Aberdeen Harbour on Hong Kong Island. The firm operates two refueling stations, one out side of Aberdeen and the other at Cheung Chau Island also in Hong Kong waters. They also have the 24.9 by 9.32-meter tank-ship Tai Hing Hong 2 which, at 232.9 gross tons, carries up to 400 tons of diesel fuel in her four tanks.

Accompanied by the firms operations manager Amy P. Y. Kan and port engineer Ho Ying Kan, he visited the tank-ship where she was moored alongside the companys fuel barges in Aberdeen. Built at the Guangdong New China Shipyard in 1999, the vessel represents both generations of Hong Kongs reliable diesels. The two pump engines are a pair of Gardner 6L diesels registered for 111.9 kW (149 HP) at 1500 RPM while propulsion power is provided by a pair of Cummins NT855 diesels registered at 261.1 kW (350 HP) each.

The Fan family, who own both the Tai Hing Hong Oil Co. Ltd. and Bing Kee Metal & Fishing Equipment Centre is, according to the founders daughter, Karen S. K. Fan, very much representative of the Aberdeen fishing community. Both her father and grandfather lived on boats in Hong Kong before starting a hardware store in the 1950s primarily catering to the fishing community. More recently the family has expanded its business to include a shipyard in the Pearl River delta area.

On board the Tai Hing Hong 2, the sweet purring of the 1500-RPM Gardner diesel was joined by the deeper note of the 1800 RPM Cummins engines. As the little tanker let go her mooring lines the strong notes of her Cummins engines were matched by virtually all of the fishing boats coming in and out of Aberdeen Harbour.