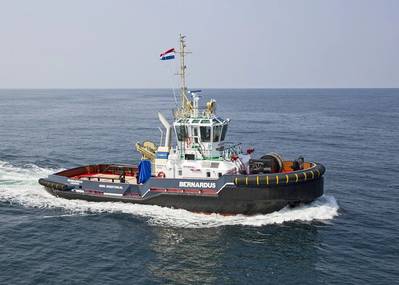 Based in IJmuiden near Amsterdam (the Netherlands), Iskes has been operating a conventional Damen ASD Tug 2810 since November 2011. “We already had a very good experience with our existing Damen ASD 2810, which is ideally suited to Amsterdam,” said Iskes owner and Managing Director Jim Iskes. “We are very happy with its performance and so are the crew; it was a logical move to choose Damen for the Hybrid version.”

Damen’s research into hybrid tug technology has culminated in the Bernardus – Iskes’ new ASD 2810 Hybrid. By combining diesel-direct, diesel-electric propulsion and battery power the vessel can achieve average fuel savings of up to 30% and up to 40% reduction of emissions, Damen said. Being green, however, does not mean sacrificing power – the Bernardus still has a bollard pull of 60 metric tons.

During station keeping, maneuvering and low speed sailing (up to 5 knots), the Bernardus will utilize battery packs to operate under 100% electric power. The same batteries will be used when the tug is at the quayside at night, doing away with the use of generators. “This will be not only very economic but will also be so much more comfortable for the crew,” said Damen Product Director Tugs Coen Boudesteijn.

“Harbor assisting tugs typically operate in polluted areas with high levels of particulates and NOx, so being green is becoming a more and more important selling point,” Boudesteijn continued. “The coming decade will see a lot of changes happening in engine rooms as they become greener and cleaner.

“This delivery demonstrates that the shipbuilding industry has the knowledge and ability to build greener vessels,” Boudesteijn said. “But we need more support from governments in terms of subsidies because being green has to be commercially attractive too.”

The Bernardus is Damen’s first ASD 2810 Hybrid, but it is not the last. Production has kicked off with four additional vessels under construction at present. This includes three for the Royal Netherlands Navy in response to developments in emissions reduction and environmentally friendly shipping and one for stock.

Damen’s involvement in sustainable innovations in propulsion goes further than the new hybrid ASD tug. They have already built an electrical patrol vessel for the canals of Amsterdam that runs on 100% battery power (charged at night by a small Steyr engine). Furthermore, the company now has concrete plans to construct an LNG inland shipping vessel, otherwise known as the Ecoliner, and an LNG-powered tug.