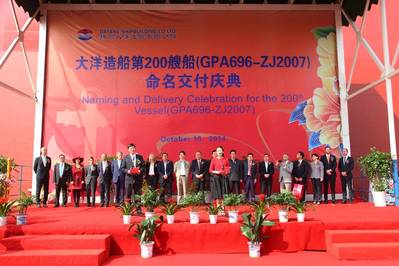 An IMR GPA696 was recently christened and delivered at Dayang Shipbuilding Co. on October 15, 2014, a significant milestone in that the ship is the 200th ship built since the company was founded 10 years ago.

An IMR GPA696 was recently christened and delivered at Dayang Shipbuilding Co. on October 15, 2014, a significant milestone in that the ship is the 200th ship built since the company was founded 10 years ago.

Representatives from the government, banks, Bourbon, BV, supervisors and suppliers were on hand. Dayang Shipyard is one of the construction bases of the Sinopacific Shipbuilding Group (SINOPACIFIC). The vessels delivered by Dayang have all been for international clients, and include 142 bulk carriers, 44 OSVs, 10 container ships and 4 LPG vessels for a total deadweight of 8.923 million tons.

“Thanks to our cooperation and joint efforts, SINOPACIFIC Dayang Shipyard is able, today, to achieve this 200 ship milestone," said Simon Liang, Chairman & CEO, SINOPACIFIC. “Starting from the first 53500 DWT bulk carrier, the serialization of our products and processes has enabled Dayang Shipyard to develop fast; Among the many vessels that Dayang Shipyard has delivered, our own brand products with our in-house design account for as much as 53%, most of which are environmentally-friendly and energy-saving vessels. This milestone highlights the strength and ensuing productivity brought by SINOPACIFIC’s strategy and technology driven policy.”

The new GPA696 IMR vessel is the 7th vessel of the GPA696 series built by SINOPACIFIC. In 2011, the first GPA696 was delivered by SINOPACIFIC Zhejiang Shipyard (the second SINOPACIFIC shipbuilding base), which became the first Chinese shipyard to construct an OSV with such a highly sophisticated design.
Recently, SINOPACIFIC won OSV orders from major European and American ship owners, and the company’s in-house design OSV under the “SP” brand has achieved its first orders from markets such as Russia, Mexico and Singapore.