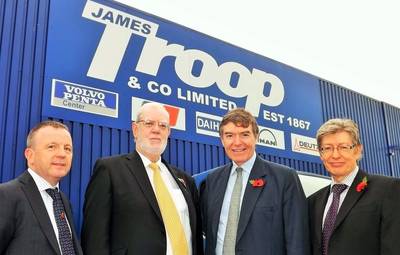 Defense minister Philip Dunne has visited Liverpool City Region U.K. based ship engine specialist James Troop & Co Thursday to review progress of a £2 million deal to replace the generator sets on seven Royal Navy Mine Hunters.
Dunne, the Minister of State for Defense Procurement at the Ministry, met with staff across James Troop, one of the shipping industry’s most established companies. Dunne heard how James Troop is finishing the first phase of the contract to supply Volvo Penta engines and generators for the Royal Navy’s Sandown-class Mine Hunters: HMS Bangor, HMS Ramsey, HMS Pembroke, HMS Penzance, HMS Shoreham, HMS Blyth and HMS Grimsby.
The work has taken place at bases in the U.K. and the Gulf. With the generators now in place on all seven ships James Troop will focus on training naval personnel on engine maintenance as well as providing ongoing technical and spare parts support.
Dunne said, “The £2 million contract for marine generators for the Royal Navy’s mine hunters has enabled this family-run British company to sustain important and highly skilled U.K. jobs at their base in Merseyside.
“We recognize that the U.K.’s defense contractors, whatever their size, are a vital source of innovation in our supply chain, and in the last year, the MOD has done business with over 5,400 Small and Medium Enterprises, worth over £800 million. As one of the shipping industry’s oldest companies, James Troop has a proven track record of flexibility which is helping to ensure the U.K. Armed Forces deploy with some of the very best kit available.”
James Troop operations director Robert Pollock said the firm was able to show Dunne the level of support and expertise James Troop is offering the Royal Navy.
“We worked extremely hard in the tendering process to show the depth of our experience, the caliber of our engines and the world-class skills of our engineers,” he said. “Being able to provide training to Royal Navy staff and fast, efficient, 24-hour, seven-day-a-week support worldwide was key to winning this contract. The skill of our engineers is one of our principle selling points. Being a financially sound, well-established company enables us to invest heavily in a constant program of training with Volvo Penta. This means our engineers are among the best trained in the world, giving our clients confidence that we can deliver. Our team are further fully qualified and trained in all the marine safety and environmental standards as well as risk assessments. This is critical for the Royal Navy which demands the highest standards of knowledge and compliance with regulations.”
In total, James Troop, one of the major Volvo Penta Centres in the U.K., was tasked with supplying 25 engines and generators – three sets for each navy vessel, one for training and three on standby.
James Troop managing director and chairman Bob Troop said,“It was a real morale boost for our team to receive a visit from the minister after we have all put so much time and effort into this contract," he said. "We were able to tell Mr. Dunne about the scope of work we have undertaken and our absolute commitment to delivering the highest possible standards of engines, training and, going forward, technical and spare parts support. We have especially enjoyed organizing and running the training program for naval staff at our Runcorn base. This has enabled us to really get to know the teams operating the equipment. By building this rapport and understanding we can operate more efficiently constantly improving the standard of service for the Royal Navy."
• By building • Philip Dunne • Royal Navy
Email