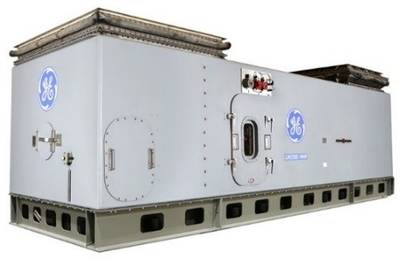 This new module, which was fully certified by the U.S. Navy in 2019 after receiving MIL-S-901D shock qualification, provides a 5,500-pound weight savings (50% wall weight reduction) and 60% quieter enclosure, the manufacturer said.

“One of the most important design features of this new module is that it provides a safer environment and improved access for sailors,” said Kris Shepherd, Vice President and General Manager, GE Marine. “By using lightweight composites versus the steel enclosure predecessor, wall temperatures are 25oF to 50oF degrees cooler so there is less heat rejected into the engine room.”

The Module Modernization Program (MMP) was a four-year collaborative effort with the U.S. Navy, the Bath Iron Works shipyard in Bath, Maine and GE. Key GE strategic partners in this effort included RL Industries for help in developing and qualifying the carbon fiber enclosure; and DRS Power Technology, a long-time GE Marine packaging partner, who helped lead the way in satisfying all first article inspection quality requirements and package assembly.

Changes to the LM2500 system include the composite module, components and fewer shock mounts for weight reduction, all while leveraging the experience and loadings from previous LM2500 shock tests with running units, GE said. Components such as sensors, transducers, ice and flame detectors and the heater also were updated.