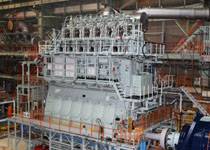 Mitsui Engineering & Shipbuilding Co., Ltd. in cooperation with Mitsui OSK Lines recently carried out a full-scale demonstrational running of electronically controlled slow-speed diesel engine for marine use burning natural gas, which is the first of its kind in Japan and is called ME-GI, and has confirmed that the engine has the same reliability with the oil fired diesel engines used for almost all ocean going merchant ships in the world.

This demonstration was carried out on the electronically controlled ME-GI of which fuel system was converted to gas burning system from conventional oil burning system temporarily.

Heavy fuel oil is the most popular for marine diesel engine. However, natural gas is drawing attentions as a fuel of marine engine in near future in view of not only low emissions but also procumbent cost, which could become lower by a recent development of shale gas.

MES completed its power generation plant with slow-speed gas injection diesel engine (GIDE) in its Chiba Works in 1994. Through this operation, MES carried out various reliability assessments and accumulated its various operation know-how of such engine. ME-GI, based upon such operational experiences, is a fusion of state-of-the art technologies such as electronic control technology and emission reduction technology. MES exerts its utmost efforts for further adoption of ME-GI to many commercial ships starting with LNG carrier.

In July last year, LNG carrier Double Eco MAX with ME-GI propulsion and with decreased fuel cost and CO2 emission by 30% was developed by MES and put into market.

The company will also establish a sales system to offer to customers ships with ME-GI propulsion system which are economical and environmentally friendly as well.