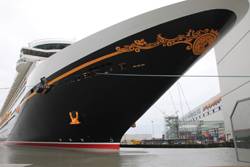 Disney Fantasy was delivered by Germany's Meyer Werft, the "Cradle of Cruise Ships."