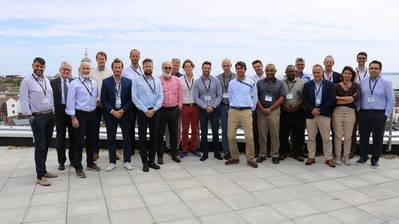 Cox Powertrain has completed two distributor conferences which have taken place ahead of the much-anticipated launch of the world’s highest power density diesel outboard, the CXO300. Marine engine specialists from all corners of the globe came together at two separate country events to learn about the engine’s final concept and discuss plans for the product launch.

Attending the conference in Miami, U.S., which hosted eight North American distributors, as well as representatives from Cox‘s distributors in China, New Zealand and South Korea, Lance Henrichsen, from Boatswain’s Locker in California, said, “The conference was of huge value to us and meeting in person with our fellow distributors is key to strengthening our network. This will pay big dividends in the future. The meeting allowed everyone to hear and discuss matters that emails and phone calls just cannot achieve.”

On the impact that the engine will have in the U.S. market, Henrichsen said, “Considering the already significant presence of high horsepower gasoline outboards in the U.S.A. together with the demand for more power, greater reliability, and superior fuel economy, the opportunity for Cox’s diesel outboard is tremendous. There is no question that it is exactly what the US market has been asking for.”

A second conference was held at the state-of-the-art headquarters of Ben Ainsley’s INEOS Team UK in Portsmouth, U.K., which played host to Cox’s line-up of European, Middle East and African distributors.

Demand for a high-powered diesel outboard such as the CXO300 is also high in this region and Dominic May, Director of Berthon, Cox’s U.K. distributor explains why, “The technology will be disruptive in this market, enabling a move from dangerous petrol to safer diesel. It will be transformative for boat builders, who can now offer more volume on board by removing the diesel inboards and replace them with the Cox Powertrain diesel outboard motor on the transom.”

Order books for the CXO300 will open in November this year and the engine will go into production in 2019. Details of the final engine concept will be revealed at the forthcoming Seawork International exhibition on July 3-5 , where Cox Powertrain will be exhibiting with their UK distributor, Berthon.