Tom Mulligan was born in London in 1958 and grew up in Manchester, England.... 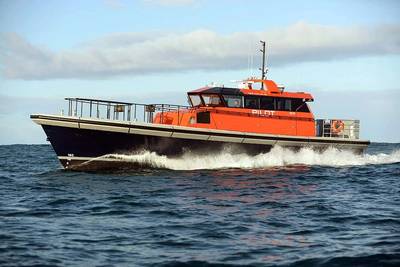 Harbour Services Australia has taken delivery of a Berkeley Class pilot boat from Dongara Marine as the second such vessel to operate in the Western Australian port of Fremantle. (Photo: Dongara Marine)

Western Australian boatbuilder Dongara Marine has delivered a second Berkeley Class pilot boat to the port of Fremantle. ‘Genesis’ will join ‘Berkeley’, which has been operating in the port since 2015.

Whereas Berkeley is owned by Fremantle Pilots, the 19.4-meter new vessel has been acquired by Harbour Services Australia (HSA) as part of the company’s fleet of 18 workboats ranging from six-meter punts, mooring/lines boats to 21-meter cargo vessels, a crew transfer and dive/survey vessel, and craft that have been adapted from other roles such as police patrol boats, fishing vessels, and purpose-built pilot boats. Genesis, however, represents the first significant newbuild contract for the company.

“High open water speed for fast transits, extreme stability, and confirmed self-righting are all hallmarks of the Berkeley Class, but it is arguably the high levels of seakeeping and maneuverability that contribute most to the pilot boat design maximizing overall operability, as well as the safety and comfort of pilots and crew, even in challenging offshore seas.”

“The hull design combines a long waterline, fine entry and highly flared bow with twin keels and twin, over-size rudders that reduce roll and increase both directional stability and maneuvering performance. This is combined with a resiliently mounted composite superstructure, the low weight of which also contributes to stability and operating efficiency, while simultaneously enhancing habitability through reduced noise, vibration, and heat transfer,” he stated.

“As a result of optimizing the full system, including engines, running gear, and vessel displacement and trim, we are achieving fuel consumption that is about 30 percent less than earlier Berkeleys at the same operating speed,” he said.

Genesis runs easily at 24.5 knots and was able to achieve 32 knots at full power during trials. This good performance range enables Genesis to have a more diversified role, which includes transferring surveyors, ships agents, crew and, if required, pilots between ship and shore. To facilitate this the cabin is arranged with military-grade suspension seats for six passengers and two crew, more than the four pilots of the earlier vessels.