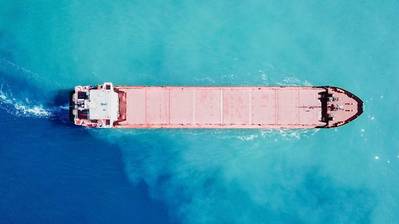 With the world's largest dry cargo ships coming out of service for refits to comply with tougher rules on emissions, charter rates are expected to remain strong, a top Cargill executive said, after posting 7-fold gains already this year.

"There are a lot of ships - especially on the capesizes - that will go into scrubber fitting which basically means they will be out of service for at least 25 days each to do so," Jan Dieleman, president of trading firm Cargill's ocean transportation business, told Reuters.

"If you add it all up, in a very short period of time you take actually quite some supply out of the market."

Ship owners must cut emissions by reducing the sulphur content in fuel to 0.5% from 3.5% under the rules, which are set by the United Nations' International Maritime Organization (IMO).

To comply, ship owners can use low-sulphur fuel, opt for other, more expensive clean fuels such as liquefied natural gas, or install exhaust gas cleaning systems known as scrubbers.

Dieleman said some ships had already been taken out of service to be fitted with scrubbers and the pace will pick up in the third and fourth quarter of this year before the regulations come into effect on January 1, 2020.

Having hit lows under $3,500 a day earlier this year, earnings for capesize ships already stand at more than $26,000 a day, buoyed in part by demand for iron ore.

Cargill, the largest privately held U.S. company, charters over 600 ships at any one time. More than 90 percent of them are dry bulk ships - including the largest capesize class - and are used for carrying commodities such as iron ore, coal and grain.

Between 5% to 10% of the ships that Cargill charters will be fitted with scrubbers and the remainder will use low-sulphur fuel.

A major shake-up for the all shipping companies, dry bulk vessels will be the sector with the largest proportion of scrubbers.

The Baltic Exchange's main sea freight index, which tracks rates for ships carrying dry bulk commodities including grains, is now over 1,700 points, having tripled since February.

"A lot of people are ... staying away from ordering new assets because people simply do not know what the asset of the future will look like," Dieleman said.

"On the supply side, it’s relatively constrained and you have an OK growth in demand. If you put those together ... you are looking at a healthier market than we have seen in the last couple of years."