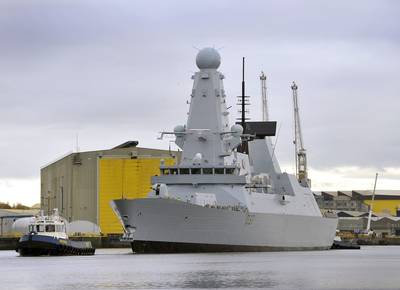 DUNCAN, the sixth and final Type 45 destroyer built by BAE Systems, has today set sail from the company’s Scotstoun shipyard on the Clyde to embark on her second stage sea trials off the west coast of Scotland.
During the next 19 days at sea, DUNCAN will undertake an extensive program of trials, including final testing of the ship’s power and propulsion, combat systems, navigational and communications equipment ahead of her handover to the Royal Navy in March next year.
Jennifer Osbaldestin, Type 45 Program Director at BAE Systems, said: “Today marks a significant achievement in what has been a highly successful Type 45 program as the final ship embarks on her sea trials. The team has worked tirelessly to put DUNCAN to sea to demonstrate her outstanding capabilities and there is a real sense of pride at reaching this milestone.
“The effective partnering between industry, the Royal Navy and the Ministry of Defense has been key to the success of this program and will continue to drive DUNCAN towards Acceptance off Contract in March, when all six Type 45 destroyers will have been delivered to the Royal Navy.”
DUNCAN Senior Naval Officer, Commander Phil Game Royal Navy, said: “My Royal Navy personnel are very much looking forward to joining our established MOD and BAE Systems teams taking DUNCAN to sea for the second and final contractor sea trials period and putting our ship through her paces.”
Following her sea trials, DUNCAN will return to the Clyde for final integration and testing, before setting sail for her home port of Portsmouth. Working alongside the Royal Navy at Portsmouth Naval Base, BAE Systems also provides in-service support to the Type 45 destroyers, coordinating all aspects of repair, maintenance and support to the fleet. The Type 45 Class Output Management team has successfully supported HMS DARING, DAUNTLESS and DIAMOND during their overseas deployments and continues to support HMS DRAGON and DEFENDER throughout their training periods as the vessels prepare for upcoming deployments.
The Type 45s will provide the backbone of the UK’s naval air defenses for the next 30 years and beyond. The destroyers will be capable of carrying out a wide range of operations, including anti-piracy and anti-smuggling activities, disaster relief work and surveillance operations as well as high intensity war fighting.
Each destroyer can engage a large number of targets simultaneously, and defend aircraft carriers or groups of ships, such as an amphibious landing force, against the strongest future threats from the air. The vessels will contribute a specialist air warfare capability to worldwide maritime and joint operations.